St. Lawrence College's Brockville campus to get a hand from local artist 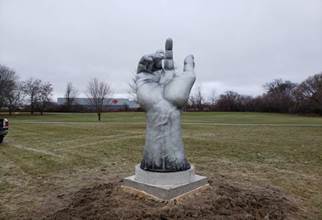 St. Lawrence College's (SLC) Brockville campus is the new home of "Ascension," a nine-foot fibreglass sculpture of a hand by local artist David Sheridan. Installation on campus was completed this week, and an unveiling ceremony will be planned in the spring, 2020.

The sculpture was offered to the City of Brockville, but when finding a suitable public space became a challenge, SLC offered an ideal location on Parkedale Avenue, ensuring its visibility and accessibility to the Brockville community.

The creation of "Ascension" was made possible by the material donation and guidance of Built Right Utility Bodies (Murrray Golledge).  Sheridan's wife, Diane, has been part-time faculty at the SLC for the past 30 years, and Sheridan has been teaching oil painting at the college for the past two years. Murray Golledge and his son, both owners of Built Right, represent two generations of St. Lawrence College graduates.

The unveiling ceremony will acknowledge the following:

The City of Brockville

David Sheridan has spent his career as an art teacher for the Upper Canada District School Board.  He was entrusted with many community projects supported by community sponsors. The projects resulted in Sheridan and his students being awarded a number of provincial and national awards and official recognition by Prime Minister Stephen Harper in 2006.