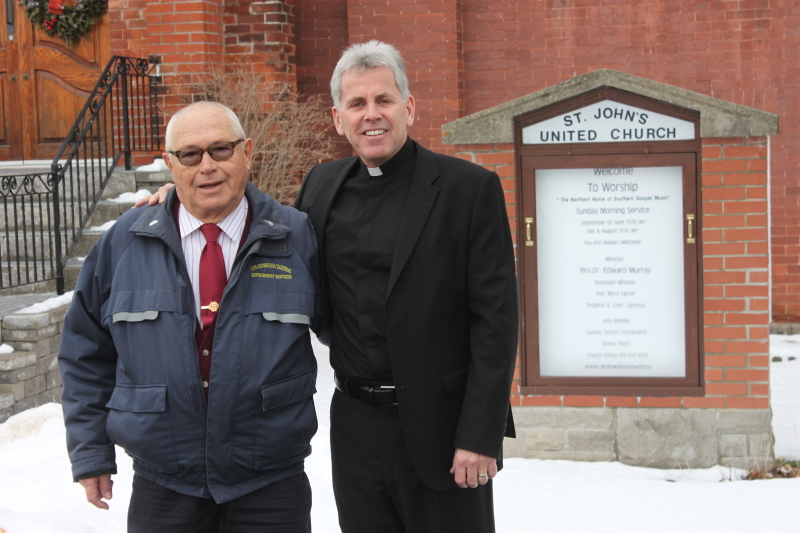 "Half of the firefighters in Ontario are volunteers. But that doesn't mean they're going to witness less-severe critical incidents than their full-time counterparts."

CARDINAL - In an age when dwindling attendance numbers in mainstream denominations are forcing many small-town churches to shut their doors, the congregation at St. John's United in Cardinal is opening theirs a little bit wider.

The small rural church is readying for the launch of a program dubbed 'First Responders United'. The novel ministry targets frontline personnel, such as police officers, firefighters and paramedics who are suffering from post-traumatic stress disorder (PTSD). Renovations are currently underway in the church to accommodate the program. A number of four-day residential retreats, which include treatment, meals and accommodations have already been booked for 2018.

Rev. Dr. Edward Murray, the newly appointed minister to the Dundas Street church, outlines the format of the retreats.

"What we're going to be doing, is we're going to be having a series of retreats over this year, and hopefully in years to come, where we have a 12 first responders...police officers, firefighters, paramedics, correctional officers, 911 dispatchers and possibly some military veterans...come here for a week," Murray explains. "Those people all share one thing in common. They've all been, in one way or another, injured by the kind of work they've done. They are suffering from what is called post tramatic stress disorder. For most of them, it's due to the accumulation, over time, of witnessing tragedy, after tragedy, after tragedy," he says.

Murray, a clinical psychologist, holding doctorate degrees in clinical psychology and pastoral psychology, a master's degree in counseling psychology, along with his master of divinity degree, has a deep history that includes first-hand experience on the front lines of society. Prior to entering private practice and the ministry, he was a member of the Ontario Provincial Police (OPP), retiring in 2003 at the rank of Detective Sergeant with the OPP Behavioral Sciences Section.

"PTSD not only has psychological effects; it has physiological effects," Murray says. "At the same time, the person's home life and their relationships are affected. And so for many of them, they are struggling with the effects of post-traumatic stress disorder, things like depression anxiety, social withdrawal, irritability and insomnia. And it affects their whole life. A lot of this gets bottled up. It gets bottled up and they live with this. Many of them alone, for a long time...and certainly many of them end up experiencing marital breakdowns, difficulties with addictions, problems at work and other kinds of relationship problems."

St. John's hopes to offer a platform to reach out to some of the estimated 10 -20 percent of first responders affected by PTSD. Working in a culture where talking about their personal feelings isn't something that is openly encouraged, First Responders United will provide an opportunity for them to come together, sharing that component in a way that allows them to initiate the healing journey.

"And so here we talk about the traumas that they experience," Murray confirms. "We also talk about family relationships and what got them into becoming the first responder in the first place. We teach them about the physiology of PTSD and how their thoughts and emotions are affected by it. And we give them tools to recover. We want everyone to leave here having tools, resources and a support network that they can connect with," he concludes.

As for the renovations themselves, long-time St. John's member (and former township fire chief) Jim Grant is one of the individuals overseeing the project. A bulk of the labour on the development is being performed by fellow church members.

"At present, we are turning what used to be Sunday school classrooms into sleeping accommodations, as well as one meditation room. There were 12 classrooms, which will now become the meditation room and five sleeping areas," Grant said, adding that some of the space will be shared between the new ministry and traditional ones. "Some of the rooms will be multi-purpose. The choir room will revert back to a choir room when not in use by the First Responders United retreats. Some of them (rooms) will revert back to Sunday school rooms during Sunday service. The classrooms were all in use, but in various functions, and will now serve dual roles, with the exception of the meditation room and a couple of the storage rooms," he finishes.

Grant's appreciation for the ownership the entire church community has brought to the endeavor is shared by St. John's Board Chair Donna Gladstone.

"The congregation has embraced First Responders United fully," she agrees. "They have shown their support through volunteering to help with the renovations such as painting, cleaning, purging and supporting in any way they can to see this outreach a success. We all are confident we will be able to provide the necessities for the first responders. We feel this outreach will provide a unique, and necessary, program to the folks who risk their lives, each and every day to protect us...and who see and experience things we can only imagine," Gladstone said.

Nor is the way the congregation adopted this mission lost on Rev. Murray.

"It's astounding, the level of enthusiasm, and the dedication," Murray conveys with the slightest hint of awe in his voice. "It's just everyone here joining in a common purpose. And everyone brings their talents and their abilities. We've got tradesmen, and there are members of the congregation, that have devoted weeks, maybe months, of their time to this".

While a handful of other facilities in Canada offer similar services, the most striking difference with First Responders United is its inclusive nature. That contrast is most evident in price.

"There are very limited programs that I'm aware of in the country that are geared specifically for first responders. There are a few in Ontario. However, the difficulty is that those programs are very costly. They will run anywhere from five to ten thousand dollars a week," Murray points out, explaining that often the nature of being a first responder limits the monies available for PTSD treatment. "If we take a look at the firefighters in Ontario as an example. Half of the firefighters in Ontario are volunteers. But that doesn't mean they're going to witness less-severe critical incidents than their full-time counterparts. These are people who could be farmers, work in factories, offices or have all sorts of other kinds of occupations. They are going to traumatic incidents as volunteer firefighters, doing the same sorts of things professional full-time firefighters do...and then the next day going to their regular day jobs. A lot of them don't necessarily have insurance coverage that will pay for the kind of treatment that they need. And so, what we hope to do here is provide them with an opportunity to come, at either a very low cost, or, if they don't have insurance, they can come for free and get the same benefit other first responders do."