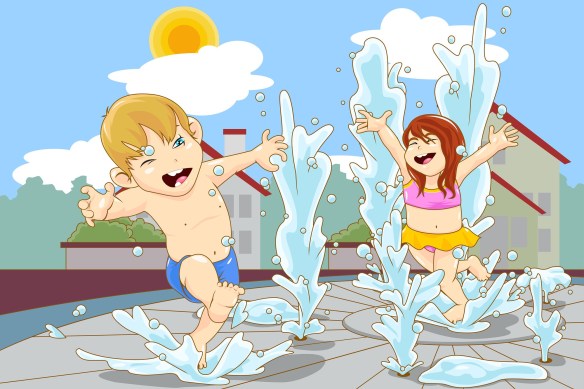 PRESCOTT - There was another discussion Monday night at a meeting of Prescott's committee of the whole about the best location for the town's proposed new splash pad, and this time, the discussion turned a little fiery.

A little more than a week ago, the town initiated a survey that sought to provide some idea of where the public would like the splash pad to go. The results were presented Monday night by the town's Recreation and Tourism Coordinator, Katie Forrester.

There were 652 respondents to the survey, of which 434 - 66 percent - were from Prescott. A further 29 percent were from Augusta or Edwardsburgh-Cardinal, and the remaining four percent - 27 people - responded to the survey from Brockville, North Grenville and South Dundas.

Respondents were asked to indicate how many people were in their household, and from those responses, Forrester said, it can be concluded the survey represents about 2300 people. Of the total number of respondents, 510 said that either they or a family member would make use of the splash pad. When asked if the cost of building the splash pad facility would influence their choice of location, 76 percent of respondents said it would not.

The big question on the survey, however, asked respondents to pick which of five different options was the best location for the splash pad.

There were also a great many comments appended to the survey answers, said Forrester, most enthusiastic about the project, some expressing concerns about cost and others about the need to build a parking lot or washroom facilities at certain locations.

"That's my only disappointment with the survey," said Councillor Ray Young, noting that too many respondents seemed not to realize that washroom facilities would have to be built no matter which location is selected and acknowledging that town council could have done a better job making that point clear.

The most vociferous objection to the survey, its results and its conduct, came from Councillor Lee McConnell. During the 10-day survey period, McConnell said he made a point of looking at the discussions taking place on Facebook about the survey and about the splash pad project, and he was upset to see that one of his council colleagues, whom he did not name, made a pitch for one of the locations.

"I thought the point of the survey was to get the view of the people, not to convince people of your view," he said.

McConnell saved most of his vitriol, though, for Mayor Brett Todd, saying he became angry when he noticed that the mayor had posted a comment on Facebook in response to someone who had mentioned the prospect of putting the splash pad at Howe Terrace, which is the location first suggested by McConnell at a previous committee of the whole meeting.

The mayor, who has never kept secret the fact that he greatly favours Centennial Park as the location for the splash pad, pointed out in his Facebook post that the Howe Terrace location was too near the railway tracks and would put the splash pad right beneath some power lines.

McConnell said the mayor was wrong and needed to take a closer look at the location. The tracks are not all that close and the splash pad would not be underneath the power lines, he said. He also took up the idea that too few respondents fully appreciated that the town would be building not just a standalone splash pad but a "splash pad facility," complete with washrooms, a building to house the pump, and perhaps a parking lot.

"Obviously, we have made a mistake on this survey, because we have not adequately explained it," said McConnell.

The councillor was most exercised, however, about what he considered to be the interference in the survey by his council colleagues through their participation in Facebook discussions.

"The survey is practically worthless, because it's been poisoned by Mayor Todd and a member of council," he said.

The mayor scoffed at the idea that councillors could not offer their opinions; opinions that have already been previously expressed in open council, on Facebook without fear of contaminating the survey.

"The survey speaks for itself. The questions are very clear," said Todd. "This has been a very good and democratic process in the end."

The mayor also shook his head at the fact that the issue had become so contentious.

"I don't think this needs to be rancorous."

McConnell was not without allies around the table, though. Councilor Leanne Burton also found the survey wanting, suggesting that the public was not sufficiently informed about all the factors that ought to be taken into consideration in deciding where to put the splash pad.

"The survey didn't tell the whole story," she said.

Though explosive at times, the discussion wasn't very long. Councilor Gauri Shankar pointed out that in the absence of Councilor Teresa Jansman and CAO Matthew Armstrong, it might be best to hold off further discussion and certainly any decision until the next meeting. He, too, though thought the rancor of the discussion was unfortunate.

"This should be something we are celebrating. This is a good news story," said Shankar.

Councilor Mike Ostrander also hoped that by the next meeting a final decision could be made and lamented that continued disagreement on the issue could jeopardize the town's Trillium grant, which must be spent by the end of the year.

Dan Beatty, the town's Director of Operations, also pointed out that regardless of how much time council takes to decide on a location, even if the decision had been made weeks ago, the splash pad was never going to be built and operable by this summer and the plan was always to have it up and running for the summer of 2020.