Singing the praises of a local guitar maker 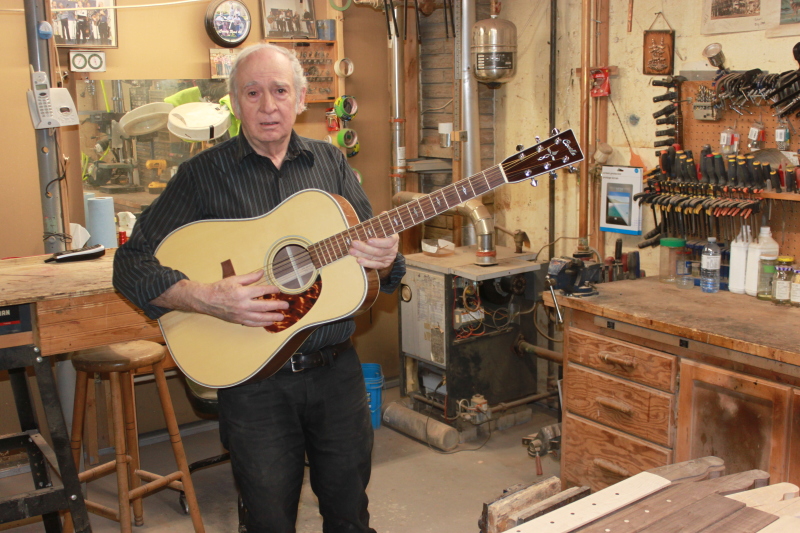 Singing the praises of a local guitar maker

He was a ten-year-old, walking down the street in New Wexford, when he encountered a couple of his classmates dragging an old battered guitar on a rope in the gravel behind them.

"When I asked them if they wanted to sell it, they said they would need to go ask their mother," Colville says. "When they came back out, I gave them fifty cents for it."

Young Bernie soon found out however that buying the guitar was only half of the equation.

"The strings were missing. So was the piece at the front of the guitar that they attached to...and there was a hole worn right through the back of the body," he recalls with a slight chuckle.

And so a fascination with music was launched. Making use of what he could to make the instrument usable, he hunted down the parts needed to restring the guitar and, using a chunk of wood from the family's woodstove supply, mended the damage in the rear of the shell.

It would certainly not be the last guitar that Coville would bring back to life. In the six decades that followed, the Johnstown luthier has repaired guitars for scores of individuals in the local and regional music scene. Active in the community himself, as a member of locally-acclaimed County Road 44 bluegrass band, Coville has become the go-to-guy for a number of his peers when in need of repair to their cherished instruments.

Trying his hand at building instruments began about twenty years ago. Since then, operating from his basement workshop, Coville has produced dozens of guitars and mandolins. Most of those have made their way into the collections of musicians throughout the community.

While his humility might limit his evaluation of the instruments he brings to life, those who know his work are quick to praise the quality of his creations.

"As far as I'm concerned, they are right up there with my Martin," says fellow band member, and South Grenville Bluegrass Festival organizer Kim Wallace, comparing Colville's guitars with those from one of the industry's leading manufacturers. "He does a really good job on them. He is probably one of the better luthiers that I know. I've seen a few others that do good work, but he is by far superior...there is no question about it. And when he does guitars, he does them right...he doesn't skip any steps, that is for sure," Wallace says.

Another of the local festival organizers, Lucien Giroux could not agree with Wallace more.

"I own two of Bernie's guitars and a mandolin," Giroux explains. "I've been playing for over 40 years; own eight guitars, three mandolins, an electric bass and a stand-up bass. Bernie's guitars sound and play much nicer than anything else I own. Quality is always the number one concern with Bernie. The sound is spot on, clean and bright...and smooth, clean action as well," Giroux concludes.

It was at the South Grenville Bluegrass Festival in 2015, when all three men were touched by an event involving one of Coville's creations. Looking for ways to fund the event, Coville offered one of his coveted guitars to be raffled off at the festival. While the raffle has now become a yearly tradition, in 1985 it brought particular meaning. That year it was won by Coville's close friend, Fred Leonard.

"The first year we did a guitar raffle, I think it was the second year of the festival," Wallace begins, "Fred made the comment that, if he won it, he was going to donate it back. We drew the winning number at 8:00 p.m. on the Saturday night of our festival...and Fred won it. When he came up to get the guitar, he just handed it back to Bernie."

Taking the gesture one step further, Fred donated a second guitar as well, one from his own collection, to the festival's fundraising efforts. The meaning behind the kindness was revealed shortly after the festival.

"We didn't know it at the time," Coville says, the ever-present glint leaving his eyes for the briefest second, "but Fred had cancer. He died shortly after".

There will be another Coville acoustic guitar up for raffle in Spencerville at this August's festival. Coville will be back performing with County Road 44. In a community bound together by much more than just the music, his impact will continue to be felt on, and off, the stage.

Perhaps Giroux sums up the quiet luthier's presence most accurately.

"Bernie never says much. Doesn't drink. Doesn't smoke," Giroux says, adding with a chuckle that Coville can utter the occasional swear word. "I met him 25 years ago. He has always been a mentor to me. I'm proud to call him a friend. I hope he is recognized as an upmost citizen of Johnstown, and in our music world...as a great player and a number-one luthier."

High praise, that equates to a pretty good return for a ten-year-old kid's fifty cent investment.