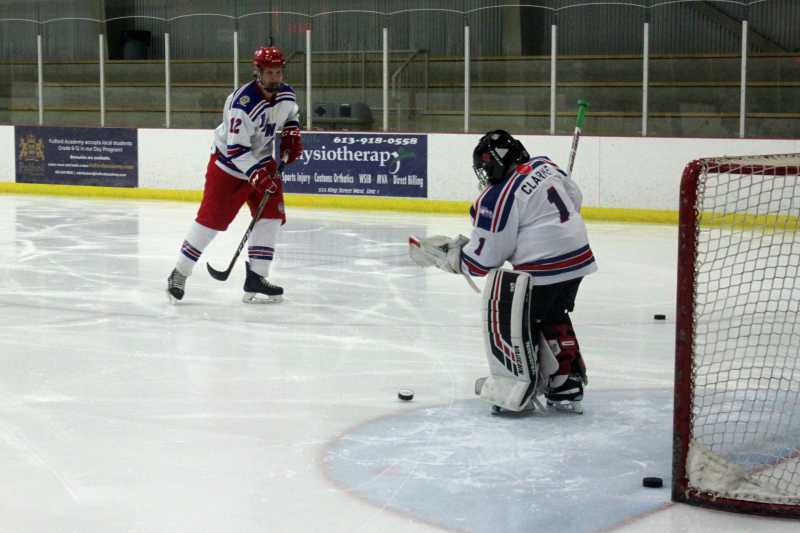 CARDINAL - Sometimes the more things change, the more they really do stay the same.

Prior to Saturday night's game against the West Carleton Inferno, South Grenville Rangers defenseman Hunter Shipclark reflected on the journey that brought him to the local National Capital Junior Hockey League franchise. After playing miner hockey within the South Grenville Hockey system, followed by stints with the Double "A" Kings and Brockville Tikis, the Spencerville native returned home this season to play for the Rangers.

"Growing up, I watched Ronnie Harrison and Lucas Stitt when they were playing and they made the run for the Gill Cup. I was there every Saturday night at the old Leo Boivin (arena) cheering them on," Shipclark recalls.

Stitt (GM) and Harrison (Head Coach) are now behind the bench of the Rangers. It is a fact that is not lost on the Carleton University mechanical engineering student.

"You know, it's two guys...two local guys...they put this together and have (built) the team we have," Shipclark says. "The commitment they show, it really helps motivate a lot of the guys to come play here."

The hometown atmosphere is also a big draw for many players.

Nowhere is that relationship with the community more evident than in a small-town rink.

"The ice isn't that different," Shipclark says, comparing playing in front of Rangers fans as opposed to his experience with the Tikis in the larger Memorial Centre in Brockville. "But we get more fans here than we would in Brockville. With the smaller stands and higher capacity of people here, the influx of fans brings out a great atmosphere to play in. It's just great all around. It's nice to go out and know that you have a whole community behind you."

Standing six-foot-five-inches tall and weighing in at 225 pounds, Shipclark understands how to use his size with his role on the ice.

"I'd say my role is a shutdown defenseman. I guess they call me a utility guy - to go out and play both ends of the ice, get down and into the dirty areas; wherever it is needed... just a role player."

It is a mindset that seems to be the mantra of the Ranger squad that continues to buy into the commitment concept that Stitt, Harrison and the entire coaching staff bring to the dressing room and bench.

And it is a plan that is reaping rewards. South Grenville earned two more wins this past weekend, a 4-2 victory over the Jets in Metcalfe on Friday night, followed by a one-sided 6-1 win over West Carleton in Cardinal on Saturday. At the midway point of the schedule, the Rangers' record stands at 18-2. They are currently undefeated in their last six outings and have owned first place in the NCJHL since the puck dropped on the season.

Asked how far this team can go, Hunter Shipclark is optimistically cautious.

"It's a tough question," Shipclark injects. "You know, obviously, the plan is a championship, and I think we have a good chance for that. We have a good team, but you can't take any nights off. But the goal, as every team, is (winning) a championship."

The Rangers are on the road for two games this coming weekend. Friday night, they return to Metcalfe for a rematch against the Jets. Sunday night, South Grenville travels to Morrisburg to meet the Lions

The interview done, Hunter Shipclark heads back to the dressing room to prepare for the game. Ten minutes later, he is the first player out for the pre-game skate. The next two skaters on the ice are Jackson Jodoin and Cole Clarke. Jodoin and Clarke are two youngsters from an Atom C team who would serve as the flag bearers during the pre-game ceremony. Their faces are alive with excitement as they roll through warm-up drills with Shipclark.

And so, the great circle of hockey continues.