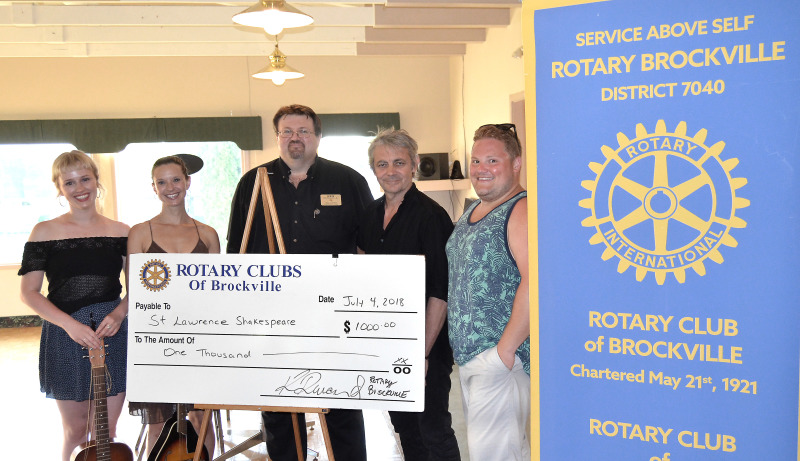 PRESCOTT - The Rotary Club of Prescott may be no longer, but Prescott remains very much a part of the Rotary family.

A big part of the Prescott Rotary Club over the past 20 years has been the Durand family, particularly Ken Durand Sr. and Ken Durand Jr., both of whom have since joined the two Brockville clubs, and when they asked their new clubs if they might consider including Prescott in their Rotary activities, the Durands were heartened by the generous response they got.

"It's a good group of people that love their community," said Ken Durand Jr., of the two Brockville clubs.

The Brockville Rotary Club has actually been around for nearly a century. In fact, it was the Brockville club that sponsored the founding of the Prescott Rotary Club back in 1939, and the neighbouring Rotarians plan to continue supporting Prescott. Every year the Prescott Rotary Club would donate $1,000 to the St. Lawrence Shakespeare Festival, which the club had supported from the festival's founding, and at the meeting last week, the Brockville and Thousand Islands clubs continued the practice, presenting a $1,000 cheque to the Festival.

Durand Jr. also announced that the traditional potluck dinner that Prescott's Rotarians would hold for the cast and crew of the Shakespeare Festival would be held once again in August and that the Rotary Club would again sponsor one night's performance, which this year will be on August 1.

After some sincere words of gratitude from the St. Lawrence Shakespeare Festival's new artistic director, Richard Sheridan Willis, he and several members of the cast--Melissa Morris, Eva Foote and Zachary Counsil--entertained the crowd of more than 60 Rotarians and local dignitaries, with some selections from this summer's productions of As You Like It and Taming of the Shrew.

Towards the end of the evening, Jack Henderson, of the Brockville Rotary Club, stood up to make a special presentation to Ken Durand Jr. One of the highest honours bestowed on a Rotarian is the Paul Harris Fellowship, and a Rotarian can earn more than one, for a variety of different contributions to the Rotary movement. Durand Jr., who is also currently Rotary's area governor, already has one Paul Harris Fellowship, in recognition of dedicated service, but last week he was awarded his second award for a financial donation made to the Brockville clubs by the Prescott club at the time of its dissolution. The popular Christmas Ham program that the Prescott Rotary Club used to run every December was also acknowledged. Former Prescott Rotarian Candy Alexander was awarded a Paul Harris Fellowship last fall, and Ken Durand Sr. will also be honoured with his second such award in the near future.