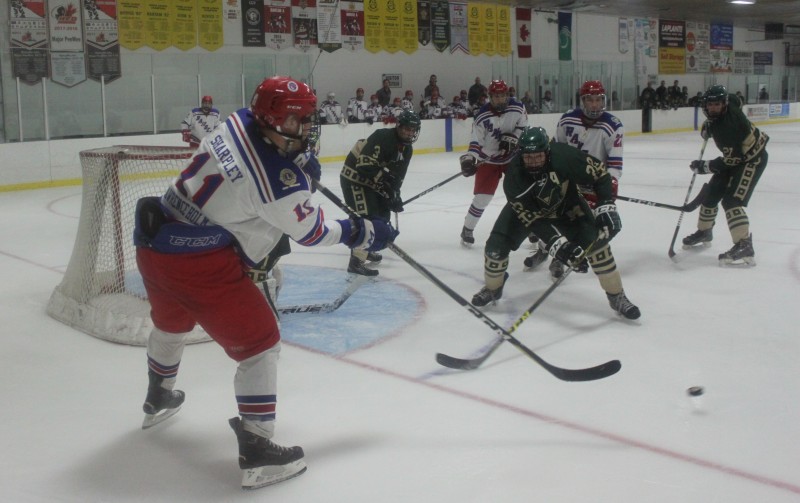 South Grenville Ranger Dylan Sharpley sets up a play from behind the Jets net in Metcalfe on Sunday afternoon. JOURNAL PHOTO/MARTELLE

METCALFE - The South Grenville Rangers are headed to round two of the National Capital Junior Hockey League (NCJHL) playoffs. The Rangers completed a sweep of their opening round, dispatching the Metcalfe Jets in four straight games, with a pair of wins at the Larry Robinson Arena this past weekend.

Going into Metcalfe up by two games in the best-of-seven series on Friday night, South Grenville continued the level of play that earned them first place overall in the NCJHL during the regular season. Two goals in the first period, followed by three in each of the remaining frames, were more than enough to bring home a one-sided 8-1 win. Ranger goals came from Cameron Dillon (2), Jordan Dodge, Kyle Dillabough, Braydan Forestall, Cooper Kingston, Dylan Sharpley and Jacob Servage.

Facing elimination, it was a much more determined Jets squad that showed up on Sunday afternoon. After once again going down 2-0 after 20 minutes of play, a feisty Metcalfe team clawed their way back into the game, scoring once in the second period and then again early in the third to tie the game. In a heated final frame that saw both teams make full use of the penalty boxes, South Grenville eventually found the back of the Jet's net with the winner and added two insurance markers to finish the game and the Jet's season. Final score 5-2 in favour of the visiting team.

Xavier Dusablon, who got his first start of the series in goal for the Rangers, was tossed from the game after a scrum in the final moments of the second period. Limoges-Ring returned to the crease to finish the contest.

Elsewhere in the league, the underdog Gatineau Hull-Volant upset the second-seeded Vankleek Hill Cougars winning four of six games. The Volant will move on to face South Grenville in the semi-final round of the playoffs. North Dundas leads their series against the Clarence Castors 3-2. In the final first round match-up, St-Isidore holds a 3-2 series lead over the Bytown Royals. Both series resume on Wednesday, March 4.

Ranger defenseman Nate Medaglia says the Rangers fate in round two is tied directly to following the work ethic that got them where they are today.

"Personally, I think we did an excellent job capitalizing on the powerplay this series. We stuck to our systems and continued to play a solid team game. Onto the next (series) against Gatineau won't be easy," Megaglia told the Journal. "We have to be ready to bring the intensity, for 60 minutes straight, every game."

"The series against Metcalfe taught our club many lessons about resiliency and the importance of mental toughness within a playoff series," noted the veteran sniper who ended the Metcalfe series with nine points to his credit. "With Gatineau recently knocking off the top regular-season team from the Eastern conference, we know they are capable of beating any team. In order for our team to be successful, we will need to stay disciplined and stick to our systems."