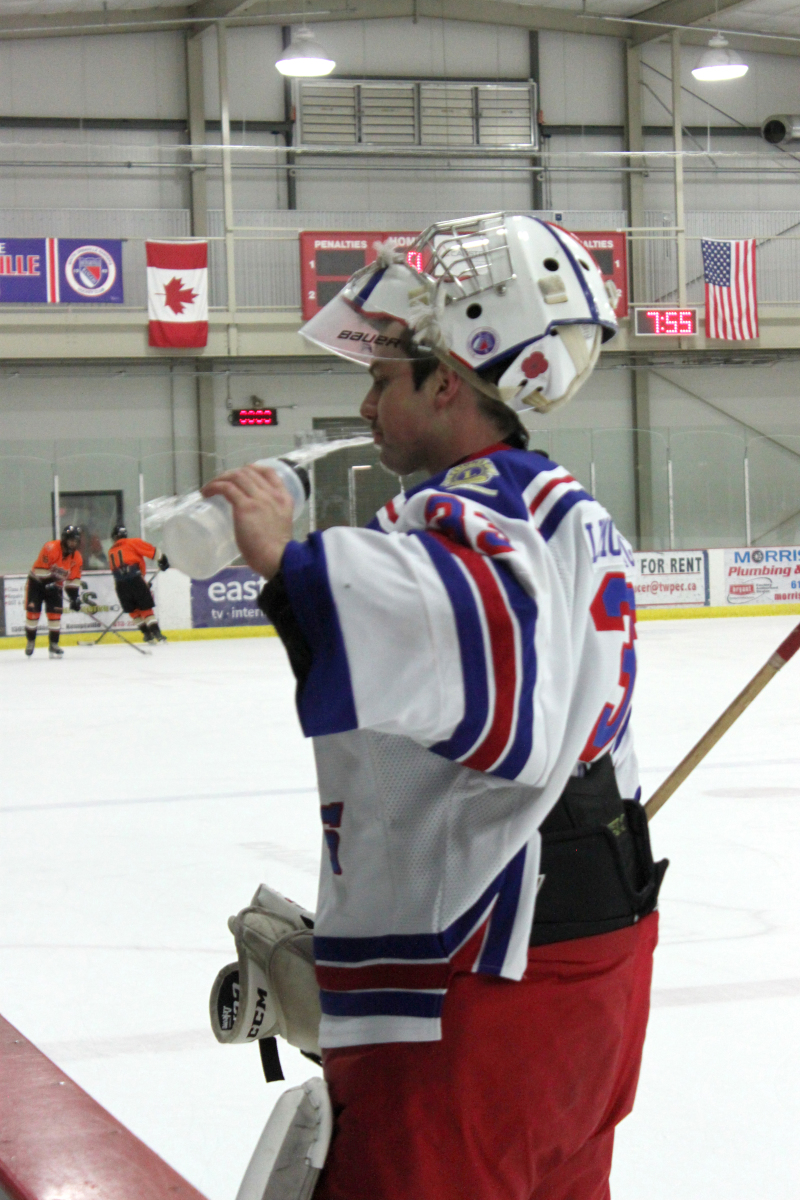 Samuel Limoges-Ring picked up his tenth victory of the season at the Ingredion Centre in Cardinal on Saturday, backstopping a 9-2 win over the Morrisburg Lions.

CARDINAL - Outscoring their opponents 18-5 over the weekend, the South Grenville Rangers continued their dominance of the National Capital Junior Hockey League (NCJHL). The Rangers closed down the 2019 portion of the schedule with a 9-2 win over the Morrisburg Lions in Cardinal on Saturday night before travelling to St-Isidore to ground the Eagles 9-3.

At the Ingredion Centre on Saturday night, the last-place Lions came into the game with only a single win to their credit and facing the top team in the NCJHL.

Morrisburg managed to hold the Rangers at bay until the midway point of the first period when Dylan Sharpley found the back of the Lion's net to open the scoring. Jacob McGonegal and Kyle Dillabough would add to the total, sending the Rangers back to the dressing room up 3-0.

Cameron Dillon would lead the way for the home team in the second frame with a pair of goals for South Grenville. Morrisburg managed two markers late in the period, but by then the damage was done.

Four more goals in the final frame from the Rangers, Sharpley with his second and singles from Brody Ranger, Hunter Shipclark and Owen Webster, put the game well out of reach for the visitors.

It was more of the same in St-Isidore on Sunday. The Eagles produced one more goal than the Lions the previous evening, netting a single marker in each of the three periods, but were overwhelmed by a destructive Rangers offence.

South Grenville snipers found the back of the net with three in the first stanza, two in the second and four in the final period for the 9-3 win. Jordan Dodge had a four-goal outing. Cole Edgley, Jared Fenlong, Braden Forestell, Cooper Kingston and Dylan Sharpley rounded out the scoring for South Grenville.

Sam Limoges-Ring picked up the win in the South Grenville net.

The Rangers are out of action until January 3, when they visit the Bytown Royals. They are currently running away with the West Division, their 43-point total more than double that of second-place North Dundas. Their totals are also enough to maintain a comfortable five-point gap over the Gatineau Hull-Volant for the overall lead in the NCJHL.

Perhaps the most impressive statistic for the Rangers is the fact that, despite being the top team in the league, South Grenville has no players listed in the top five in the NCJHL scoring race and only two in the top 10. It is reflective of the balanced team-first concept that has come to define the 2019-20 version of the South Grenville Rangers.