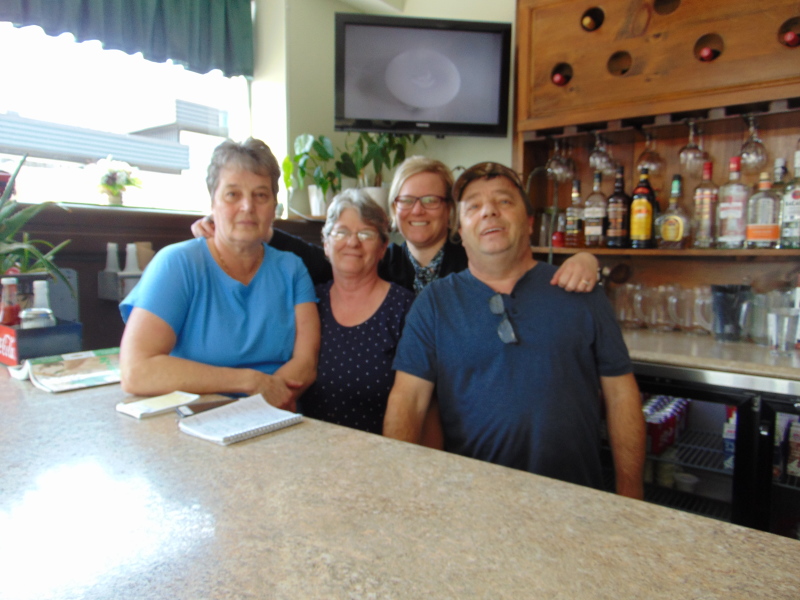 Familiar faces standing up for downtown businesses: a reduced staff at Bobby's Restaurant on King Street have pledged to stay open for delivery and takeout during the COVID-19 pandemic. This sentiment is becoming common among downtown Prescott businesses

Pet food, people food, and a ride to get it all are still available to residents of Prescott.

During the recent closures of some businesses and downsizing of others, most local retailers are figuring out ways to change and adapt with the times. Many have seen a decrease in revenue but are finding innovative ways to make it up.

"I've actually seen some parts of town I've never been in before," says Bob Watson of Bobby's Restaurant on King Street East. After closing their dining room 16 days ago, Watson instituted a delivery service for his patrons old and new.

The idea of delivery was something he had never explored before, but he says it is going well. People call in to order and he leaves it on their front step or porch. Almost everyone is using credit card numbers to pay, or telephone banking. In cases where some elderly clients aren't set up to do that, they are leaving money out for him in an envelope.

He is down to a skeleton staff after having to lay off most of his servers, but says he and partner Melissa - known to regular patrons as Missy - and one front counter person can handle it for now.

Pizza tops the list of take-out and delivery orders, but a lot of burgers, poutines, and wraps are being shuttled around town as well. He says he and his pared-down crew will be open as long as they can.

The virus closures are a double hit for Watson. His establishment had recently re-opened after a long hiatus due to remodeling and repair.

Across town at Pet Valu, things inside look about the same, except for the addition of bright red lines on the floor to indicate where to stop when you come in. Staff are at the door to ensure only two shoppers are in the store at a time. Pets are still welcome to come in with their owners. The treats usually handed out are still available, but staff doesn't hand them directly to pets: they put them out on in a small space and Fido can help himself. And that spot is sanitized after each snack is eaten.

At Jim's Taxi there are only two drivers on duty, but the business is still open 24/7 at this point. There is no dispatcher on site and calls are being routed right to the drivers.

"We are still afloat and running," said one driver last week. "People still have places they have to go like for groceries and doctor's offices, so we will be here for those who need us."

Prescott Smoke Shop has seen a slight downturn of business and has shortened their hours, but are still seeing lots of shoppers coming in for necessities. In an interesting turnaround, they have actually doubled their usual egg order, now selling two cases a week as opposed to the previous single case.

"Eggs are nutritious and inexpensive, so it kind of makes sense," says one clerk. "And let's face it - hens aren't going to stop laying, and the eggs we sell are processed in very clean, bio-secure plants."

The smoke shop is limiting the number of customers to two at a time as well, and have a hand-sanitizer station right inside the door. They have also noticed a new kind of respect from customers - people aren't handling things and putting them back on the shelves. Shoppers appear to be taking more time to look at items and only touching what they intend to purchase.

"This is a good town and most people are getting the message," she says. That sentiment was echoed throughout the small business community.