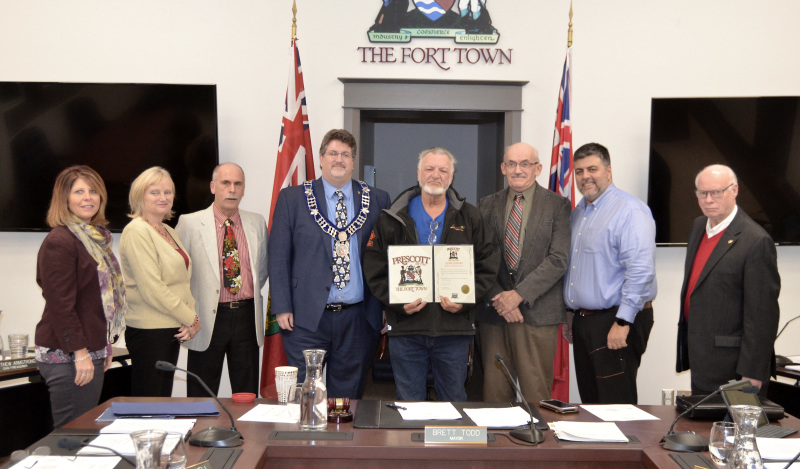 PRESCOTT - You never know what you're going to do or how you're going to react in an emergency situation. No doubt, most people hope they would respond heroically, but that's not always the case. A local truck driver, however, knows exactly how he would react.

Prescott's Laurie Clifford was honoured at town hall Monday night for his brave and selfless actions last year when he and a fellow truck driver happened upon the scene of a fatal traffic accident.

Clifford, whom friends also know as 'Crusty', was driving the same route he drove every day, along Highway 17 near Dryden, Ontario. He was following behind good friend and fellow Bison Transport driver Craig Sutherland, when the pair witnessed a horrific car accident just ahead of them. A minivan veered into the oncoming lane of traffic and collided head-on with a car carrying three passengers.

Neither Clifford nor Sutherland hesitated. They pulled their rigs onto the shoulder, jumped out and headed straight towards the wreckage. Sutherland turned his attention to the minivan, while Clifford tended to the car. He could see there were serious injuries inside the vehicle, but the door was jammed shut. Using all his strength, Clifford managed to pry it open. He carefully removed the badly injured driver from the mangled wreck and then went back to the car, where the passenger directed him to an elderly woman trapped in the back. The woman was bleeding badly but remained conscious. He got her out of the vehicle and was glad to see she was able to walk. Clifford led her to a safe place away from the accident to sit and rest.

The paramedics and fire department had been called, and both Clifford and Sutherland assured the victims that help would arrive soon. They had no idea it would be nearly an hour before emergency crews got there. It proved too late for the elderly woman. A short time after Clifford rescued her from the car and sat her down to rest, she laid down and passed away.

Clifford and Sutherland spent eight hours at the scene, and it still bothers the Prescott resident to call that day to mind, and even more to drive by that spot, where he is reminded not of his heroism or of those he helped, but of the person he couldn't.

Last month, both Clifford and Sutherland were honoured by the Ontario Trucking Association with the 2019 Bridgestone-OTA Truck Hero award, and each was also recognized as a Highway Angel by the Truckload Carriers Association.

"This is a local resident who has been honoured provincially. I thought we should recognize that," said Councillor Gauri Shankar.

It was Shankar that brought Clifford's story before council at a meeting last week, and he found his colleagues in full agreement when he suggested something special ought to be done to recognize Clifford's actions that day on Highway 17.

"Trucking is a big part of our community and it's nice to recognize these heroes," said Shankar.

When Clifford came to the podium to accept the recognition, he received a standing ovation from both council and town staff.

"I appreciate very much what you have done here," he said.

Humble and a little uncomfortable in the spotlight, Clifford downplayed what he and his friend did that day on the highway.

"It happens and you just help and you do the best you can," he said.

Mayor Brett Todd was proud to call attention to a local resident who went above and beyond and to present Clifford with a bound certificate honouring his heroic actions.

"I'm really happy to help acknowledge such an act of selflessness and bravery," said the mayor. "We need to take the time more often to recognize people such as Mr. Clifford who risk their own safety to help others."