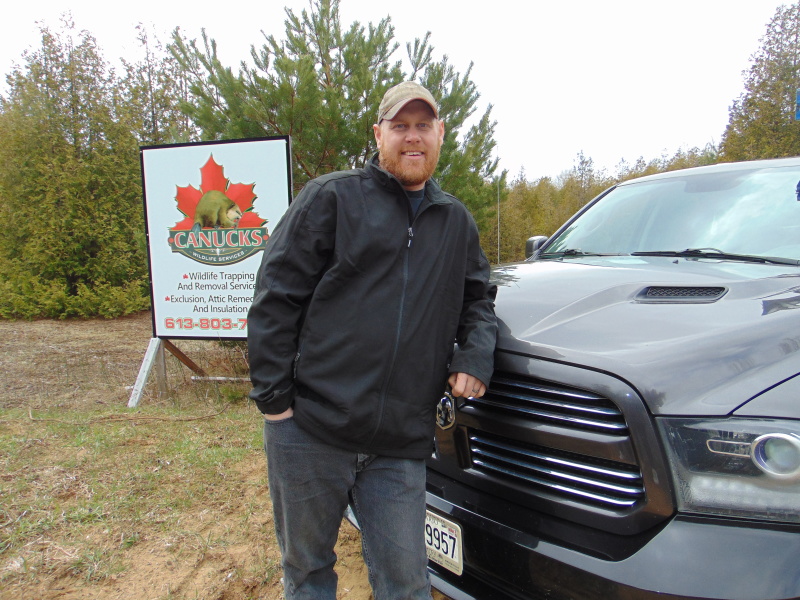 Critter control always essential: Keith Fowler of Domville takes a moment to relax and regroup at a distance between pest-control calls. His company is considered an essential service right now as the country fights disease and all possible sources of ger

DOMVILLE - If beavers are blocking your back pond and causing flooding, or rats are invading your barn, help is right around the corner.

Keith Fowler's Canucks Wildlife Services can banish those beavers and help you get rid of other pests. Although he services all of Eastern Ontario, his "Right Around the Corner" motto is especially applicable now.

"For health and safety reasons, we want people to know we have been deemed an essential service," says Fowler. "With more people at home right now, it's important to keep your 'safe' space truly safe and pest free."

"We are here to help anyone who is local as well as going long distance," says Fowler, who grew up near Domville and still operates out of this village north of Prescott. "Right now we know money is tight, but we can work out some kind of deal - no matter what's going on in the world no one should have to live with pests in their home or barn or business."

Fowler says the number of calls he is currently receiving is down, but because he is a one-man show, he is still busy. As a licensed operator in the Leeds and Grenville area, he often finds himself as far afield as Kingston and Ottawa in the same day.

After working for a similar company for close to 20 years, he decided to start his own business in 2017, the day his daughter was born. Just three years later, he and his wife have added another, separate business devoted strictly to mouse control, while she works full time at Prescott Animal Hospital. He had considered hiring another employee this summer, but that plan is now on hold.

"We are two people working in three essential services, so we don't qualify for any of the relief benefits being offered by the government right now," he says. "So it's keep working or give up our incomes."

Fowler feels safe at his job and on the road because he has access to specially designed and regulated breathing masks.

Fowler worked hard and had to travel to the U.S. to get his Zoonotic Disease Certificate. Unfortunately, in Canada there is no licensing or regulations for Wildlife Control Operators, but Fowler hopes that this may change in the future.

"Hopefully one day Canada will recognize wildlife control as a trade, making it mandatory to have this education," he said.

Fowler says that when working with animals and/or baits and traps, it's only "good business" to be licensed and insured. But safety is always his main priority.

"I just want people to know we are still open and available; it doesn't matter if it's a small job or a big one. Right now, it's vital to take control of your space and keep it safe."