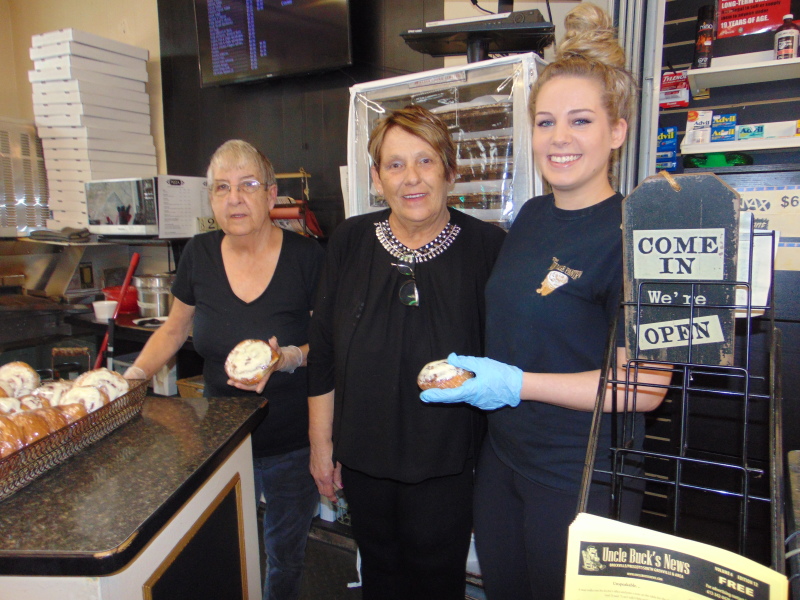 Cinnamon buns still a hot sell: Even with fewer people out on the streets in Spencerville, this kitchen is still busy turning out a local favourite. From left are Linda Mellon, Carol Kirkby and Kailee Byers on duty at The Village Pantry. JOURNAL PHOTO/BUR

SPENCERVILLE - A long-time favorite stop in the village is still open for business. Owner Carol Kirkby says she will keep serving the public as long as she's allowed.

"Right now we've seen a small downturn in, but not too bad," says Kirkby, who has operated The Village Pantry for over 20 years. "A little less busy than usual but not as bad as it could - or might soon - be."

Kirkby says she has not cut any staff hours but is closing one hour earlier in the evening. This is a move she considered all winter but has finally put into practice.

Her biggest concessions to current times includes making more space between customers and asking people to wait before approaching the front counter. Her staff has a reputation for having a smile and friendly greeting for every customer, and this has only increased.

The other famous thing about this general store-plus-takeout restaurant hasn't changed either. Those enormous, home-made, frosted cinnamon buns are still going out the door with almost every customer. Featured once on CJOH's Regional Contact program, this popular confection is considered the local symbol of The Village Pantry. If you've got one in your hand, everyone immediately knows where you've been shopping.

"Yes, we still have them and we will have them every day," says Kirkby, laughing. "They have become the thing we are really known for out here."

Other takeout items include pizza and sandwiches, and the shop does a brisk trade in both. Although her breakfast customers are a little sparse now with not as many people heading in for coffee, there are still lots of take-out orders coming in.