Mask-maker named a Scotiabank Hero for her efforts 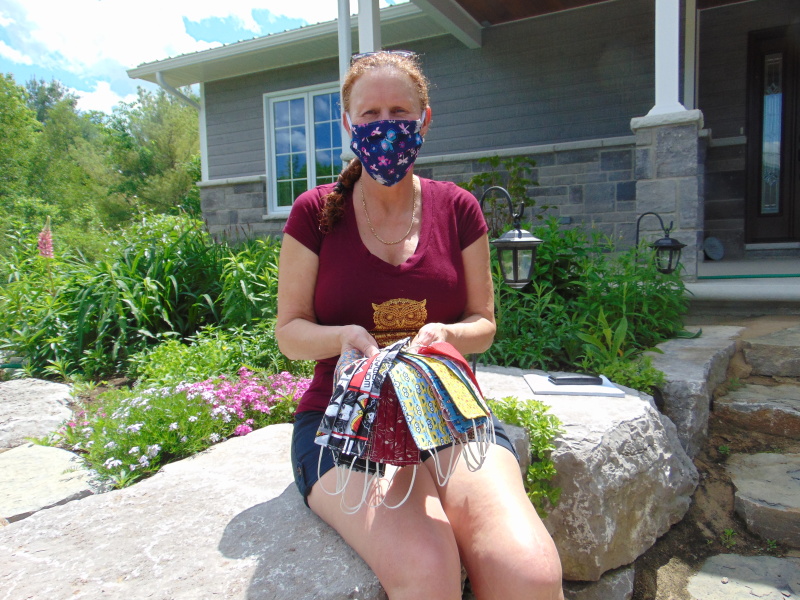 Louise Boardman of Spencerville shows samples of her work. She has made almost 1,000 masks to keep co-workers, family and friends safe. Each one is $5 and all the money she has raised in going to Breast Cancer Action Association. JOURNAL PHOTO/BURCHELL

SPENCERVILLE - Louise Boardman has turned her hobby into a lifesaving endeavour and her employer awarded her the title of 'hero' in return for her volunteer efforts.

Boardman is a seamstress and quilter and like so many people with those talents, she has turned to making masks for friends, family and coworkers. But unlike many, she has made close to a thousand of them. All the money she has received has been donated to the Breast Cancer Action Association.

"I've made 890 to this point and have a few more orders to fill," she says. "I started because I was asked by our daughter's friend for some because she knows that I sew. And then I did 60 for the retirement home where my father-in-law is." She also sent her husband off to work with enough for himself and coworkers.

From there things "just went crazy" she says. A craft store - Osgoode Country Creations - picked up on her venture and wanted to offer the masks on site, still for a $5 donation, and they featured it on their Facebook page. People responded instantly and are buying them as fast as she can turn them out. She sews the masks every morning from 6:30 a.m. until it's time to go to work, and every evening when she comes home.

Boardman's mother passed away due to breast cancer, so she decided all the money from the masks would be donated to this group. Based out of Kingston, with an office in Ottawa, Breast Cancer Action Association directs all its funding toward individuals with breast cancer and their needs, such as physiotherapy costs and supplying volunteer drivers She says the group puts the money in the hands of those battling the illness, not into administration.

As of June 6, she had raised $3,700 through the mask making. Every year she also makes a quilt and donates it to the association for raffle or auction. When asked when she will stop, she admits she doesn't know. "Maybe when I've raised $5,000; maybe not. I am still just really happy to be helping all these people."

After making masks for coworkers at Scotiabank in South Mountain and Brockville, the story was sent to the bank's public relations department who have been recognizing special people doing special things during the pandemic. Next thing she knew, Louise was an official 'Scotiabank Hero'. The story on their global webpage reads in part: "Universal Banker Louise Boardman is not only a champion for her customers, but for her local community. Louise has been making masks ... which she has given to frontline workers, a local senior's home, a funeral home, the staff at her branch and other businesses like the local Starbucks."

When she showed her husband what Scotiabank had done, he told her, "now you are your mother's hero."

Her community, her friends and family all share in Scotiabank's high regard for Boardman, but she is humble about being called a 'hero'. She says she is just happy she has the skills and the time to keep people safe while raising money for a good cause at the same time.