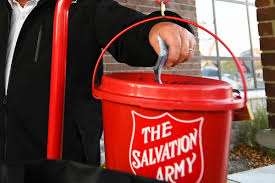 A local radio/virtual site host is pulling together several big names to produce a telethon designed to raise funds for needy families in the Prescott-Brockville area.

Brandon Brown, owner and producer of Outlaw 97.7 is a Prescott native who experienced many disappointing Christmases himself as a child. When the idea for a telethon came to him through another radio host, he leapt at the idea of helping out.

"CKOR-DB 97.7, based out of Prescott, is internet-based and can be heard around the world," explains Brown. "The Ryan Show based out of New York City and I are teaming up to put together a virtual telethon called 'Rap the Halls'. All the proceeds are going to the Brockville, Ontario Salvation Army."

Brown says the idea originally came from The Ryan Show, when host Ryan Verneuille asked him what charities in his area would benefit from a telethon. He immediately thought of The Salvation Army. All money which is pledged through the Go Fund Me page flows directly to the charity; nothing is being retained by the two radio stations.

Brown explains that he and his fellow DJs have connections to some of the biggest names in the Rap music industry and one star who has already committed his time to the telethon is platinum-recording hip-hop artist Mr. Cheeks of The Lost Boyz. Audiences will also have the chance to see live performances by Cadazone, a California-based hip-hop and R&B legend.

"This telethon is similar to other ones you see, for example the annual CHEO telethon," says Brown. "Instead of calling in and talking to whoever is on the phone, you go to the web page to make a pledge and you could get a chance to talk virtually with Mr. Cheeks or other performers."

Brown says if anyone in the Prescott area is in need, they are welcome to go to the Salvation Army office in Brockville to put their name on a list for help during the holidays.

"I'm familiar with the good work the Salvation Army does because I experienced foster homes growing up and there were years when a T.V. dinner was Christmas dinner. Without the Salvation Army, many families could go hungry right here in our area," he says.

The telethon airs December 19 from 7:00 p.m. to 10:00 p.m., and Brown says there will be giveaways and a few surprises. There will be directions on screen to take you to the page for virtual donations.

His goal is a modest $1,000 for this first-time effort, and he says he will be happy with any participation people are willing to give.

"Even if only one family benefits, it will mean the world to me," he says.