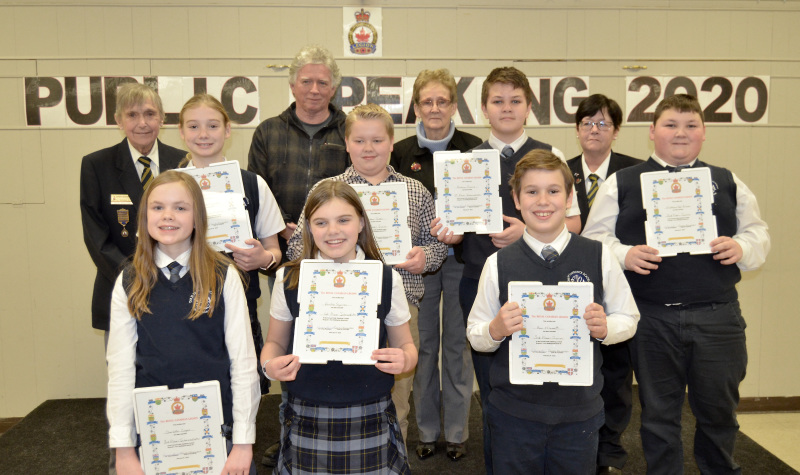 PRESCOTT - Some of this region's most articulate young people gave some fascinating speeches last week at the annual Royal Canadian Legion Public Speaking Competition, which was held at Prescott's Branch 97 on Saturday.

There were 15 contestants in this year's branch-level competition, from both the junior and intermediate divisions. Winners at the local level go on to the zone competition, which will be held in March, also at the Prescott Legion.

In the junior division, those in attendance were treated to presentations by several students from Prescott's Wellington Public School, including Hanna Silmser, who gave a talk on My Dream Vacation; Danica Zwerver, who spoke about The Ocean; Jackson Jodoin, Apple; Kira Doyle, Australian Bush Fires; and Brooklyn Quinlan, whose speech was on the Shine Dance Nationals.

The junior division also saw some great speeches by students from Prescott's St. Lawrence Academy, among them Ella Leonard, who talked about Life in the 1980s; Ben Mussett, who spoke about Greta Thunberg. Colin Notman gave a presentation on Child Labour, while Braeden Notman spoke about the Science of ears, and Matthew Del Riccio gave a speech on Scoliosis.

In the intermediate division, there were impressive presentations from Annika Squires, who spoke about Dyslexia, and Andrew Purvis, who gave his speech on the High-Water Levels in the St. Lawrence River. Elizabeth Mussett spoke about Marginal Gains and Charlotte Cooper gave a presentation on Young People Who Have Made the World a Better Place. All the intermediate competitors were from St. Lawrence Academy.

In the intermediate division, the winners were Andrew Purvis, in fourth place; Charlotte Cooper, in third; runner-up Elizabeth Mussett and in first place, Annika Squires.

The Chair of Youth Education at Branch 97, Candy Alexander, made a brief presentation before the competition began and expressed her gratitude to several people who made the annual event possible.

The speakers this year were judged by a three-person panel that included Tom Van Dusen, Elaine Bolton and Sharon Mackay. Sandra and Wayne Tuck served as scrutineers, and registration was handled by Joanne Veltkamp and Marilyn McQueen. Alexander also singled out Marilyn Beattie and the Legion's first vice-president, Veronica Burchell, for praise. After all the speeches were finished, those in attendance were treated to a light lunch donated by Legion volunteers and Tim Horton's.