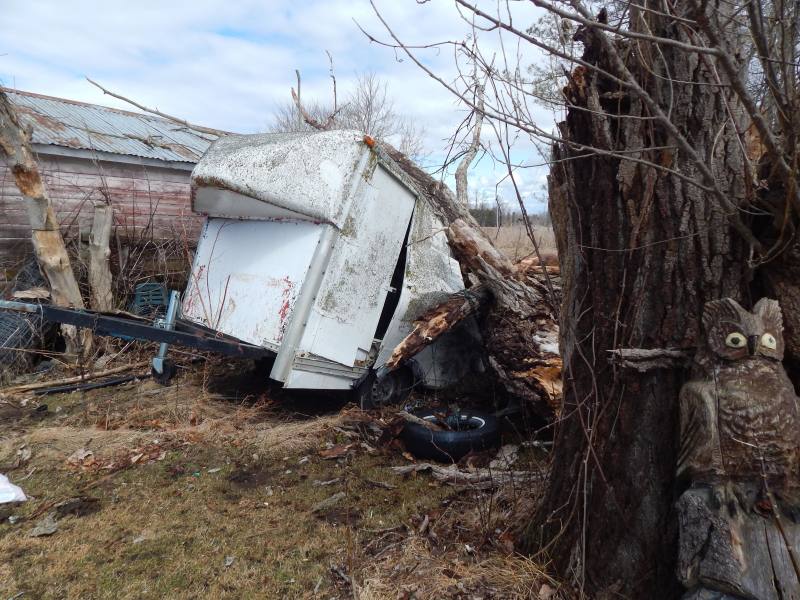 SPENCERVILLE - It was during a strong spring windstorm that the local 2nd Spencerville Scouting Group had their most valued belongings swept
away and crushed under the weight of a fallen tree. The equipment trailer and much of its contents were destroyed.

The trailer was used to tote gear, first-aid equipment, camping necessities and much more for the much-anticipated camping trips for the various groups managed by the organization. A minimum of 40 children take part in the pre-planned excursions, including local children enrolled in Cubs, Beavers, Scouts, and Venture Scouts.

"This really hit us hard; the camping trips are something these kids look forward to all year, and to have everything wiped out like that was such a loss for our group," said Scouting parent Kristine Eady-Nepssy.

Though the group did have insurance, it was an older piece of equipment and the policy didn't pay out enough to replace the trailer with a working and usable substitute. The group was forced to replace the trailer out of pocket, leaving them with a deficit of $1,500. It is their hope to cover this difference through a variety of fundraising events and efforts this summer and throughout the upcoming months.

"We've been very lucky as some of the gear in the trailer was salvageable, and many of the parents in the group and some local people have been fantastic with donating gear. We were still able to go ahead with our planned camping trip this month. The kids still got to have that experience thanks to the community and we're very thankful for that. Our next step is to finish paying for the trailer," said Eady-Nepssy.

The group has raised funds towards the trailer so far by hosting a paint night and setting up at the Spencerville Flea Market. A fundraising BBQ hosted
by Sauve Heating will be held this Thursday, August 30, from 11:00am- 2:00pm in the Canadian Tire parking lot in Prescott with proceeds going to the
2nd Spencerville Scouting Group.

For more information on upcoming events and fundraisers, or to donate, contact raksha.sjosling@gmail.com.