Local cider producer losing his livelihood due to pandemic 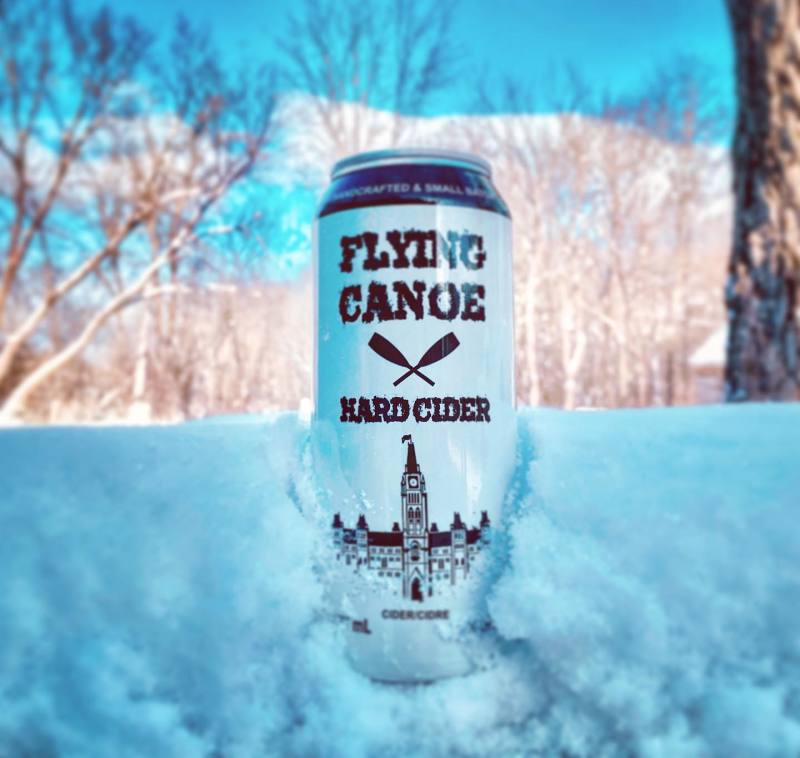 SPENCERVILLE - A previously-thriving local business may go under if an archaic law isn't changed soon.

The 'Five-Acre Rule' prohibits Pete Rainville from retailing his alcoholic apple cider from his home, even though he is a licensed supplier who buys his raw product from Ontario orchards. His Flying Canoe Hard Cider is sold throughout Ontario. It is made with offsite ingredients, but because of closures he now has to retail it from home and the rule won't let him.

He has been lobbying for a change to this rule for the last three years, but with recent business changes due to the COVID crisis, he finds himself with a huge stockpile ready to go and only a few outlets able to accept it. And because of layoffs within his company, he is doing it all himself - making it, canning it, sanitizing it and delivering it.

"We've just seen how quickly the government can change a law," said Rainville on Monday from his Spencerville home, referring to the changes to Regulation 719 which means as of last week restaurants can now deliver alcoholic beverages with takeout orders. "If they can change that virtually overnight why can't someone make it possible for me to do what I need to do to save my business?"

There isn't a lot of information on the books about the rule/bylaw which is holding him back. But it is definitely there. It may have originated close to 100 years ago during Prohibition. It basically states that unless you have five acres on which to grow your product - you can't sell it from your home. It was thought at the time it would protect Ontario orchards from being put out of business by everyone selling cider 'out the back door' of their home.

He argues that it simply does not apply in today's market. He deals exclusively with one Ontario grower, thereby helping that orchard survive just as the rule intends.

Rainville himself is facing hundreds of thousands of dollars in lost revenue, which will also affect the orchard owner. Bar closures and cancellations of large public events in Ottawa will have a huge effect on his bottom line.

It's a catch-22, not just for him but for the Ontario government as well: for every can of cider the LCBO sells at $3.45 each, 48 percent of that goes back to government. It leaves him 52 percent (roughly $1.79 per can) to run a business, pay employees and support his family. And of that $1.79, another 20 percent is what he pays out in business taxes.

"I can't say often enough that it's not about profit. If the government lets me sell my product then 48 per cent of every dollar goes back to them to pay for life-saving masks and respirators right now. But I can't help them if they don't help me."

At 52, Rainville has been working since he was a teenager and finds himself applying for unemployment insurance for the first time in his life. But he is not alone any longer - a Facebook post about his plight caught the eye of many and started a groundswell movement of letters and pleas to the Alcohol and Gaming Commission on his behalf.

On Monday he wrote to both Doug Ford and the president of AGCO but has yet to hear back. Leeds and Grenville MPP Steve Clark was in touch 20 minutes after seeing the story on Facebook. Edwardsburgh Cardinal Mayor Pat Sayeau and Deputy Mayor Tory Deschamps are also contacting officials to see what can be done.

"I'm very thankful to have this kind of support - I've been fighting on my own for three years," he says. "We moved to Spencerville from Barrhaven because we both grew up in small towns and knew how wonderful they are."

The apple cider connection played a big role in bringing this family to Spencerville. They had looked at other houses South Grenville, but his wife Melissa noticed the large stone house across the road was for sale while sitting in Little Sisterz having a coffee with the owner. Only after making an offer did they find out it was the house built by the great-grandson of John MacIntosh, who founded the original MacIntosh Orchards in Dundela.

That's where they had already been purchasing their apples for the cider. It seemed a coincidence too big to turn their backs on, and the village has welcomed the family wholeheartedly. Pete is a volunteer firefighter and they try to give seven percent of their profit to local charities. Their two sons attend school locally and the entire family has made many friends.

Pete Rainville doesn't know what the next step is other than to wait and see if the rule can be revisited or set aside. Even with local and provincial politicians on the bandwagon he has no idea how long that could take. He understands these are busy times with other priorities, but feels that Ontario small businesses shouldn't fall through the cracks.