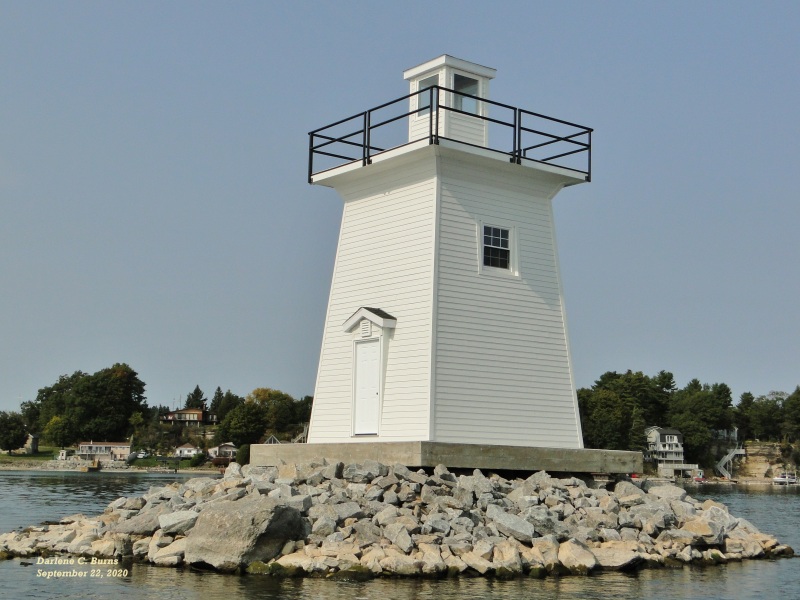 History restored: The rebuilding of the historic Five Mile Lighthouse was completed recently.

BROCKVILLE - On the evening of July 23, 2018, the historic Five Mile Lighthouse on Cole Shoal in the St. Lawrence River near Brockville was struck by lightning and burned to the ground. Now, after two years of planning and fundraising, the rebuild of the historic lighthouse is complete.

At a virtual meeting on Tuesday, November 24, Committee Chair Bob Runciman disclosed the project financial report and announced that a total of $218,363 was raised, leaving an amount of $11,300 for future maintenance and/or further investments on the site.

"We could not have accomplished this without the generosity of businesses and individuals from Brockville and the surrounding communities, and we thank each and every one for their contribution," said Runciman at the meeting.

In a later interview, he explained that the committee took on the project after Ontario Heritage, the former owner of the landmark, met with them and were not interested in restoring the lighthouse. At that time a verbal agreement was made that they would supply a heritage plaque, should the lighthouse be rebuilt.

"Everything was gone; we had to drive piles into the riverbed to get started," says Runciman. "The work was done by Kehoe Construction and took place off and on, due to their availability. Mr. Kehoe was very busy last year building docks up and down the river because of the high-water situation, but the lighthouse is now complete."

He added that the committee intends to leave their social media fundraising site in place and any further donations will be used for maintenance or future projects. He says he would like to eventually see something added so boats could tie up at the shoal to have a closer look at the reproduction of the 162-year-old lighthouse.

"That would be a decision for a future council and committee to make," said Runciman. "The finished replica now stands tall on Cole Shoal, a welcoming site for lovers of the St. Lawrence River, and a significant part of history is restored for future generations."

The committee also intends to explore other revenue-generating ideas such as postcards depicting the lighthouse.