Kruze into Spencerville this weekend 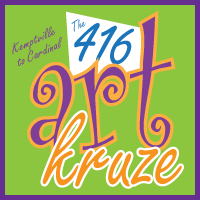 The Annual 416 Art Kruze will be held this weekend, June 23-24, 2018. The event is a collaborative effort between local artists, galleries, and businesses to promote local artists and artisans along the 416 Corridor. This year, the event has stops in Burritt's Rapids, Kemptville, Oxford Mills, and Spencerville. Locations on the weekend-long art tour will host special events and guest artists.

The Art Kruze event holds a special place of significance for local business owner Gina Vacchio, who recently opened Little Sisterz Food Preparation Studio in the village. It was during her participation in the event in 2015 with her brother, owner of Zola's Restaurant in Ottawa, that she noticed the available commercial space on Spencer Street that her restaurant now occupies.

"It was during Art Kruze that I noticed the 'for sale' sign on the building we're in now. It was that weekend that initially got the ball rolling and led us to opening Little Sisterz here in Spencerville," said Vacchio.

3 years later, Vacchio and her staff are happy to be included as one of the stops along the tour.

"This all started in 2015, and here we are 3 years later hosting an artist ourselves here in Spencerville. We feel very lucky to be able to support art and talent and bring something special to the community," Vacchio said of being a stop on the tour this year.

Little Sisterz has been an active supporter of the community and local artists in Spencerville since their opening. Barry Fawcett of ArtScene in Spencerville manages an art program for the restaurant which includes displaying works for sale by local artists. Sales of the pieces goes to support ArtScene artists as well as local charities.

"There is such beauty and talent in this area, it was really an easy choice for us to want to get involved in supporting local artists in whatever way we can," said Vacchio.

Little Sisterz will host Zinour Fathoullin as guest artist during the event. The artist, who moved to Spencerville in October, will be participating in Art Kruze for the first time this year. The accomplished local artist will be opening for business on County Road 21 in Spencerville after planned renovations are completed on the property.

"We have found to our delight, that Spencerville is such an open and welcoming community -especially the art community. When this Art Kruze opportunity came up, it was suggested that we collaborate with Little Sisterz. The owner Gina's brother owns Zolas in Ottawa and they have an active relationship with local artists whereby they feature their work in their restaurant where it is on display and for sale. Gina is following suit at Little sisters and we are grateful for the opportunity," said Fathoullin.

The main theme of the exhibit at Little Sisterz will be local landscapes and scenes. There will be a variety of selections from his current body of works from his "Movement", "Portraits", "The Arctic (Siberian and Canadian)" and "Canadiana Landscapes" collections.

As an internationally acclaimed Siberian Canadian artist, sculptor, dancer (ballet, folk and native dance) and choreographer who has lived in the Siberian and Canadian Arctic, Ontario, Quebec and Alberta, Zinour paints from the heart. He is moved by people, natural beauty, culture and the way that it can be expressed through his art.

"I take what's in my heart and put it directly onto canvas or into a sculpture. I rarely do sketches, preferring to work with my pieces on the canvas from start to finish. That is the beauty of oil - I can build and change it as I find the composition and colours," said Fathoullin.

His full body of work will be showcased at his upcoming solo show at the Spencerville Mill, entitled "Zinour at the Mill" from July 20th to the 29th. More information about the artist can be found at www.zinour.com

Art Kruze also stops at Cedar Lane Studio, Machal Gardens, ArtScene, and 416 - Art & Mart in Spencerville and other locations along the corridor. For a full listing of stops and special events, visit www.cedarlanestudio.net/artkruze.html