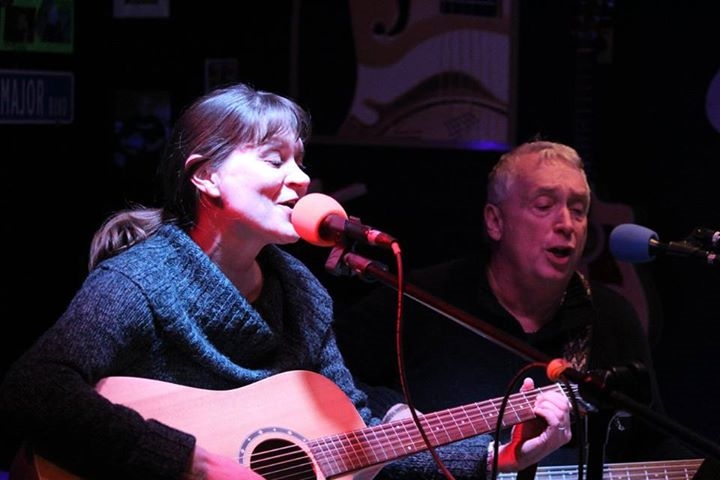 Husband and wife musicians Pam Foster and Donald Wachenschwanz are better known to audiences as Uother2.

She had a good voice and could play guitar, and he had an impressive musical background, so it was only natural that Pam Foster and Donald Wachenschwanz would eventually team up in music as they had in life.

Although they've been playing in public for many years, considerable self-doubt ensured it was always at very select venues and for as few people as possible, and it's why the husband-and-wife duo is relatively new to Brockville's live music scene, skeptical as they have been and remain that they belong among the ranks of the many accomplished local musicians in the area.

"We just do it for fun," says Foster. "We just like to make music."

In the beginning, they would play for only the most forgiving of audiences, often at churches.

"They're a gentle audience. They don't throw tomatoes or boo you," says Foster.

On occasion they also struck up the courage to take part in open mic nights, sometimes at JR Bailey's Saloon and often at Sam's Brass Racks, where they found a warm welcome and an appreciative audience that would overlook their perceived deficiencies.

"It's the perfect setting for us, and Sam is a really gracious host," says Foster.

It's also quite possible the audience didn't hear any flaws and simply enjoyed the group's stripped down versions of hit songs drawn from an eclectic mix of genres ranging from alternative pop to classic rock, with even a little bit of country now and again. The duo covers everything from Imagine Dragons to Leonard Cohen, from Emerson, Lake and Palmer to Guns 'n' Roses, but of all their various influences, it is U2 that most inspires them, and the legendary Irish rock band also helped give them their name.

As big fans of the band, it was the music of U2 that Foster and Wachenschwanz played most often when they began playing together, and when they finally decided to try performing in public, they jokingly called themselves Uother2, thinking they'd come up with a proper name some other time. They never did.

It had long been an ambition of Foster's to try singing and playing for an audience, just once, just to see what it was like. She had been playing guitar off and on since her childhood, but it was in the early 2000s that she took up the instrument with more purpose.

"I really picked it up in earnest, and developed some callouses on my fingers, about 20 years ago," she says.

For his part, Wachenschwanz has a Master's degree in music theory, and has played numerous instruments, but wasn't confident in his ability on any of them. He could, however, play a pretty good bass, and lately, he's taken up the cello as well. He always admired his wife's fine voice as well as her impeccable timing and sense of rhythm, while she envied his mastery of the fundamentals of music. They may not be Bono and the Edge, but they're an impressive duo, though they are loathe to admit it.

"We're just the quiet, unassuming acoustic music in the corner while you're eating your meal or sipping your coffee," says Wachenschwanz.

Though they were still restricting themselves to more tolerant venues, Uother2 was gaining confidence and learning more and more about putting on a show, until one day, they'd received enough positive feedback that they figured they might just try branching out a bit.

"It was just people encouraging us to keep doing what we were doing," says Foster.

Though it evolved slowly, they started getting a few gigs here and there around town, in some of the same places other great local bands and singers perform. Their first was at Brockville's Spitfire Cafe.

"The owners of the Spitfire really have a heart for live music," says Foster.

They would also play regularly at Richard's Cafe and sometimes in Johnstown at the Windmill Brewery, and the duo have appeared at some larger community events as well, such as Oktoberfest and Street Eats. Foster also sings with the Brockville Social Club, even though its repertoire of 50s and 60s music predates Uother2's setlist by a few decades.

Just because they remain unconvinced of their ability to entertain an audience doesn't mean Foster and Wachenschwanz don't put their all into every performance. For a two-hour show they will generally practice and prepare two to three times as long and make sure they run through the setlist at least a couple of times to get everything just right.

When the duo was invited to perform in the most recent edition of Brockville's long-running New Year's Eve Concert Series, they were grateful for the opportunity but far from confident they were up to the occasion. Wachenschwanz also thought it a good time to debut the cello. But the duo was determined to make sure they put on the best show possible for perhaps their largest audience at the time.

"When you've got a whole big group of people who show up on a dark, cold, snowy winter night to sit on hard, wooden pews to listen to you, with no food or drink, you want to do your best," says Wachenschwanz.

Another quite memorable, and equally nerve-wracking, performance came at Johnstown's Windmill Brewery, when Foster and Wachenschwanz found themselves playing for what they thought would be a comfortably small and lenient audience. Their stomachs tightened though when they looked over to find that a cluster of previously empty seats were filling up with members of the cast of the St. Lawrence Shakespeare Festival, each one an accomplished performer and many of them talented musicians as well.

When the actors began singing along with the music and clapping at the end of each song, the duo not only got a big shot in the arm but also a very fond memory.

"That was one of our favourites," says Foster.

Another of their favourite performances took place at the Spitfire Cafe. As usual, patrons were coming and going. Some of those sitting down were clearly appreciative of the performance, while others were paying varying degrees of attention. One couple, though, was sitting in rapt attention. Foster and Wachenschwanz were later to learn that the couple was from Turkey and spoke very little English, but the foursome had one thing in common - U2, and when Uother2 started playing the band's 1991 hit 'One,' the couple got up in the middle of the busy restaurant and started to dance.

"It's fun when you can make a connection," says Foster.

Bono and the boys feature prominently in their namesake's setlist, but apart from that, there's really no rhyme or reason to what Foster and Wachenschwanz choose to include.

"We're pretty open to trying anything that piques our interest," he says.

It would be nothing for someone in the duo's audience to hear the latest from Lady Gaga and then a classic by Bob Dylan or Creedence Clearwater Revival, and the musicians are always on the lookout for good songs with a good message that are amenable to their particular acoustic arrangements.

"If a song has a really awesome message, that will often attract us to learn that one too," says Wachenschwanz. "It's often the lyrics that grab hold of you."

That's one of the reasons they like U2 so much.

"Some of their lyrics are so profound," says Wachenschwanz.

It is sometimes difficult, though, to understand the lyrics when a rock singer belts out a tune, no matter how compelling the sentiments, and more than once, Foster and Wachenschwanz have been told by members of their audience that it was for the first time, through the duo's simpler versions of even well-known hit songs, that they were able to fully comprehend the words.

"It's really fun to take a really rock-y song and bring it down to a gentler presentation," says Foster.

That doesn't mean it's always easy, and some songs just don't lend themselves to Uother2's stripped down approach. When they decide on a song they want to try, they first track down the sheet music. Wachenschwanz then sets about transposing it and in many cases modifying the arrangement to better accommodate his wife's voice and their instruments.

"We're taking a song that a four-piece band might be doing professionally, and we're doing it with just the two of us," says Wachenschwanz.

Sometimes a section or instrument must be removed, such as the violin segment in U2's 1987 hit 'With or Without You,' and the pair will work out a new tempo that best fits the rhythm and feel of their unplugged approach to the music. Sometimes, they will also add something new to the song, perhaps a part for a cello.

Being married makes it most convenient for Foster and Wachenschwanz to work together whenever the spirit moves them and it gives them ample opportunity to refine their performances, something for which they are particularly grateful at present, when most bands can't get together to either practice or perform due to the global coronavirus pandemic and the resultant restrictions on social gatherings.

The husband-and-wife team feel for all those local musicians stuck in their homes, and in some cases deprived of their livelihoods, and they too are looking forward to the day they can all get back together and back to doing what they love.

Having been part of the local music scene for a while now, both Foster and Wachenschwanz fully appreciate just how many top-notch and accomplished artists live and gig in this region.

Uother2 has even had the privilege of playing with some of them, and among their favourites is well-known Brockville singer and guitarist Ryan James.

"We really enjoy playing with him," says Foster. "He brings a whole new sound."

Though their regular appearances around the region are on hold for the time being, Uother2 is looking forward to at least one performance this summer. They hope to go out on their deck, with their equipment and instruments, and play a little something for their neighbours and perhaps bring a little sunshine with them.

"There's just something about live music that cheers people up," says Foster.