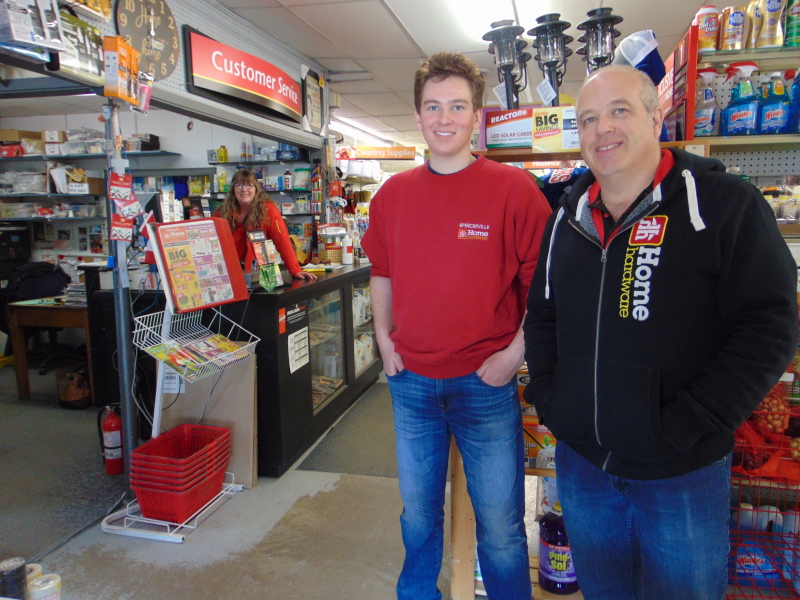 New rules not curbing business: Spencerville Home Hardware employee Jason MacNaughtan stands next to his dad, owner Mike MacNaughtan, at the now-cordoned off entrance to the store. Staff member Vicki Peters stands behind to ring up curb-side sales while a

SPENCERVILLE - Curbside service is no big deal - according to staff at Spencerville's Home Hardware Store on County Road 21. It's just a new way to make sure shoppers are taken care of.

Owner Mike MacNaughtan says he doesn't mind "reinventing the wheel". His love for this community means he will do whatever he has to when it comes to his customers. Running on a skeleton crew while trying to handle a busy holiday weekend didn't seem to phase him.

"As of last January, we've been here for 25 years," he says, "This is more than just a hardware store - it's a place where shoppers become friends with us and with each other."

As of two weeks ago, it also became a place where people line up outside at six-foot intervals and enter the store one at a time. Just inside the vestibule, there is a table blocking the inner doorway. But there is still a smile waiting for each shopper.

Unlike the big box stores in urban areas, no one here has to check and see if your items are in stock. No scanners are used to check with the warehouse - just dedicated staff who know from memory how many of each item they have, where it's kept, and the exact price.

"We are more like a general store," says MacNaughtan, "and I don't think that will ever change, no matter what disasters or diseases we endure. People in the rural area may not want to drive into the bigger towns to find something, so they check here first."

During this past Saturday afternoon's pre-Easter rush, bags were going out the door containing everything from barbecue brushes, to potting soil, to sidewalk chalk for the kids. The season is ramping up for gardening supplies and seed sales, and there are always hand tools, cleaners, paints, and nuts and bolts to supply.

During one 20-minute interval, eight shoppers were lined up outside and all were in good spirits. Calling out to each other from behind masks, staying six feet apart they patiently waited their turn. Jokes were even made about getting a longer-than-normal chance to check out the wheelbarrows and bags of peat moss.

"Usually this is part of my rushing around on Saturdays. Now I have to slow down and it gives me the chance to really appreciate everything they have outside," said one mother with two young children in tow.

MacNaughtan and staff are staying positive about the future. While they admit this pandemic has been devastating for people, they continue to fight their own fears by coming in to work. Actually, they are finding themselves more involved with the customer than usual. With orders coming in simultaneously through email, text, phone, and in person, someone is constantly answering something.

"We consider ourselves an essential service in many ways," he says. "I'm proud of the way the staff has stepped up and are making a personal contact with each customer. We are answering their needs for service while keeping them safe, and while letting them know we care," he says.