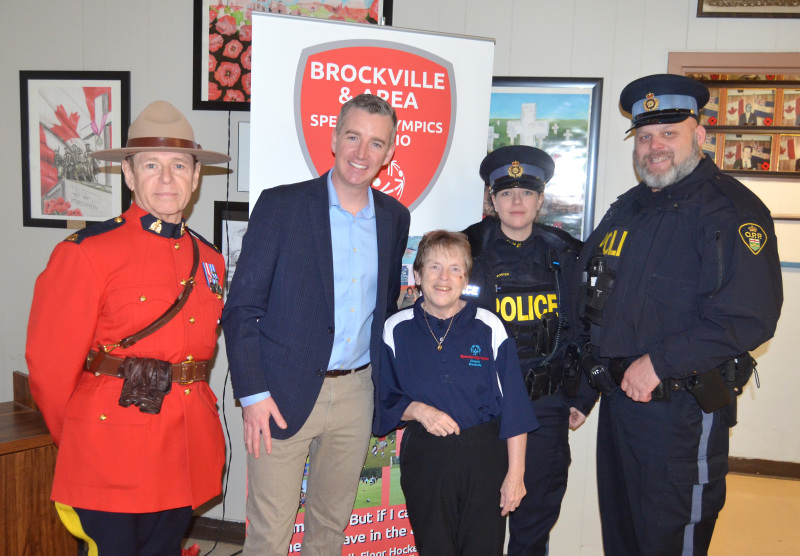 The yearly fundraiser is organized by Knights of Columbus District 57, which includes councils from Prescott, Brockville, Morrisburg and South Mountain and once again this year, the money raised from the flag relay will go to the Brockville and Area branch of the Special Olympics to help keep costs down for the special athletes who participate in the local program.

The event was held at the Legion in Prescott, where athletes and their families, as well as numerous dignitaries and members of the public enjoyed a delicious lunch and a fun afternoon, which began with a bagpiper and an honour guard of Knights leading a parade of athletes into the Legion Hall.

Joining the Knights in support of the Special Olympics were representatives from the Ontario Provincial Police and the Royal Canadian Mounted Police as well as MP Michael Barrett and four local mayors--Brett Todd, Pat Sayeau, Doug Malanka and Jason Baker.

"It's an inspiring day for us here in Prescott," said Prescott's Mayor Todd.

The Knights of Columbus Flag Relay takes place in communities around Ontario, where 13 different flags will make their rounds from district to district, where local Knights will hold similar fundraisers, until all the flags come together at the Special Olympics Provincial Championships, where they are marched into the stadium by an honour guard of Knights.

The Special Olympics was founded in the 1960s as a way of helping those with developmental disabilities enrich their lives through sport. Through regular practices and various events and competitions throughout the year, participants both young and old and of all levels of disability are given opportunities for social interaction and personal achievement that they might not otherwise have, and the Special Olympics also promotes good health through physical fitness.

The local branch has more than 80 athletes enrolled in its ten different sports, and nearly an equal number of volunteers are required to keep the programs running. It costs only $25 a year to enroll in the Special Olympics, and those who join can sign up for any number of the different sports programs.

It's fundraisers like the Flag Relay that help the Special Olympics keep the cost so affordable to local families. The Knights were grateful to all the dignitaries and special guests who attended the event and who helped make it special, but particular gratitude was expressed for Branch 97 of the Royal Canadian Legion, which offered to host the event. Legion President Eric Place was equally generous and noted how honoured the Legion was to be part of the event.