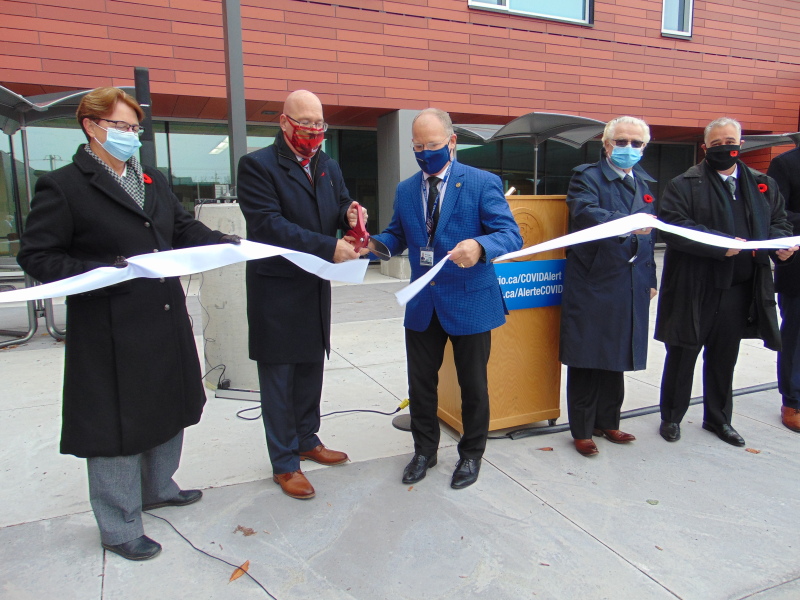 BROCKVILLE - MPP Steve Clark brought good news to the grand opening of the Donald B. Green Tower of the Brockville General Hospital. Not only was he on hand to cut the ribbon to the new addition last Tuesday, but he also announced the Ontario government was adding an additional $1.3 million which will fund 11 more beds in the hospital.

"Today is the beginning of an exciting new future for healthcare in our region," said Clark. "The opening of this beautiful, state of the art facility is transformative for our health care heroes who provide world-class care at BGH."

The ribbon-cutting ceremony was held on the outdoor terrace of the new Level One Mental Health Care wing, with several dignitaries and staff attending. While chill winds kept the festivities moving along, Jim Cooper, Chairman of the Board of Directors, acted as emcee and paid homage to the many individuals and groups which played a part in the opening of the tower.

"The opening of the Donald B. Green Tower has been a long time coming," said Cooper. "It has taken the dedication of the whole community to meet this incredible milestone. Even just in the short time since we moved (in) 39 patients on October 24, the staff and patients have seen the difference the new setting makes."

Other speakers at the function included Warden of the United Counties of Leeds and Grenville Pat Sayeau and Brockville Mayor Jason Baker. Sayeau spoke of the "impressive presentation" made to the counties by Mary Jean McFaul and Dave Beatty, who came to them in 2018 with a proposal which he said showed the countless hours of thought and ingenuity which had already gone into the plan.

McFaul and Beatty were the driving forces behind the "Under One Roof Campaign" which was the catalyst for the improvements and renovations of the hospital, which have been ongoing since that time, culminating in the opening of the Donald B. Green Tower.

"All 10 mayors on the council realized they had a vision and that we could, and should, help them achieve that vision - they needed help and it was the first time in 25 years that municipal funds were considered as a concept for supporting regional health care," said Sayeau. "The previous concept was that municipal councils don't donate, it was a government responsibility, but we all agreed that one per cent of the tax rate would go into this, making us contributors of two and a quarter million over 10 years."

Clark and the other speakers also praised the Brockville and District Hospital Foundation which collected $20 million in total from the community of Leeds and Grenville. The Donald B. Green Charitable Foundation was responsible for giving $2 million. Donald and Shirley Green and family formed the Foundation in 2002 and it has donated more than $4 million to the hospital since that time, as well as funding other philanthropic endeavors in the Brockville and area community.

The province has invested close to $159 million toward the total redevelopment of BGH which includes the new, four-story, 93 bed inpatient tower. The project includes wings for palliative care, complex continuing care, rehabilitation and restorative services, as well as the mental health beds.

The new funding announced by Clark is part of a $116.5 million investment by the province designed to create more than 766 beds at 32 hospitals and healthcare facilities across the province. This investment is intended to help reduce surgical backlogs and improve access to care during the current COVID-19 pandemic.