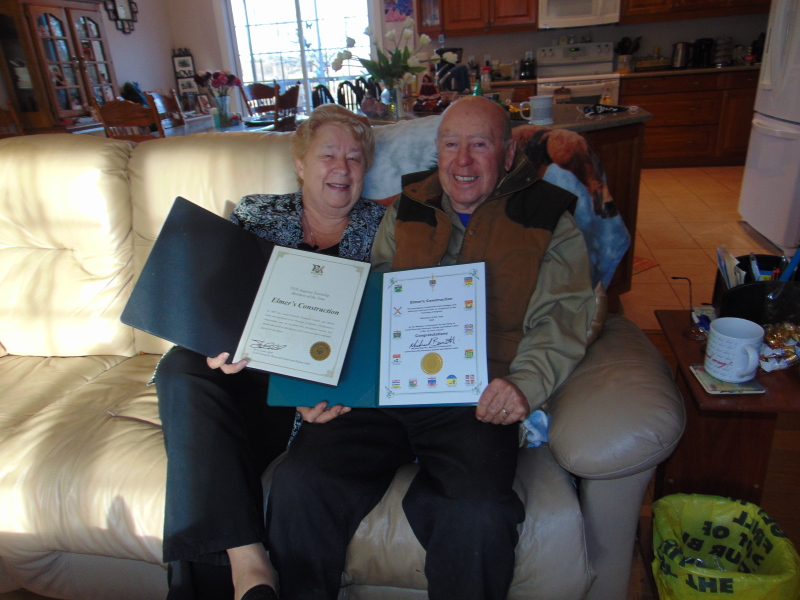 Patti and Elmer Covill of Elmer's Construction were the winners of Augusta Township's 2020 Business of the Year Award. JOURNAL PHOTO/BURCHELL

NORTH AUGUSTA - Augusta Township's Business of the Year Award for 2020 was recently presented to a humble couple who are quick to praise their employees for making them successful.

Elmer and Patti Covill of Elmer's Construction were named as Business of the Year at a ceremony held earlier in November at the MERC Hall in Maitland. It was the third nomination for the business, but their first win.

"Without good employees to keep you going you don't have much of a business," says Elmer, who has been in business for 47 years. "They keep you going strong."

The company now employs 12 people who sell, install and pump out septic systems. They also supply sand, gravel and topsoil as well as doing excavation work. When presenting the award, the township also made mention of the fact that the Covills are quick to support community events and local charities.

The award winners are chosen by the township council through its economic development committee. The Covills said it makes them "feel good inside" to be recognized in such a way.

"I'm just so proud of him," says Patti. "He's worked hard his whole life and deserves to be recognized for that."

Elmer originally thought about becoming a farmer and looked at several herds of cattle before changing his mind and starting his own company. He and Patti have five children and all their kids worked in the family business while growing up. Their son Dave remained in the business with his father.

The Covills tell colourful stories of the early years when it was just the two of them, going out in the middle of the night on emergency calls in below-zero temperatures, with just one truck and a backhoe. They remember working 24 hours a day, seven days a week to build the business into the success it has become.

"We had a lot of rough years, the two of us used to put in tile beds ourselves, and Elmer was all over Eastern Ontario," says Patti, acknowledging that he never turned down anyone in need and always found a way to get to even the most remote of properties, in any weather, to provide his essential service.

The couple are amazed and grateful for all the congratulatory emails and cards they have received. They are also justly proud of the plaques and certificates presented by the offices of MP Michael Barrett, MPP Steve Clark and the mayor and township of Augusta. All are on display in their home for visitors to see.

This year there were four other businesses in the running for the award, including Creekside Diner, Dewar's Inn on the River, Coville's Greenhouses and Shannon Farms Ltd.

MP Barrett said awards like these serve to highlight how important local businesses really are. He noted that there are thousands of similar businesses struggling to survive the COVID-19 pandemic.

"We all need to support these businesses; people need to know that we are here for each other," the MPP said in a recent interview.