All roads lead to John Street 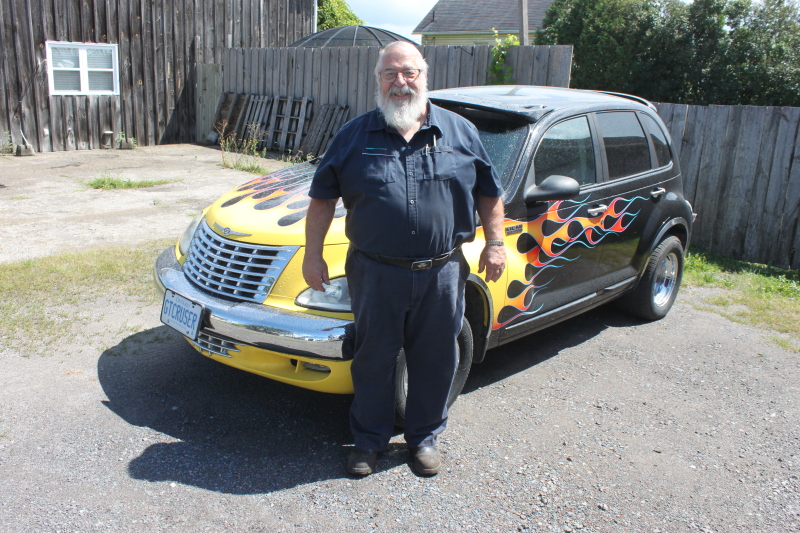 Garry Tracey and his hemi-powered PT Cruiser. Locally known as the "GT Cruiser", it is one of many custom creations to come out of GT Automotive of Cardinal. JOURNAL PHOTO/MARTELLE

CARDINAL - From the exterior, Garry Tracey's GT Automotive looks similar to thousands of other traditional hometown garages across the nation. Cinderblock walls separate a row of garage doors. To one side of the building is an office area where a constant flow of customers drop off keys and pickup vehicles in for repair. With the bay doors open to a warm August afternoon, passersby can see cars up on hoists and hear the expected sound of pneumatic tools and the occasional clanging and banging associated with the neighbourhood repair shop.

Indeed, from the view on John Street, GT Automotive is just another repair shop.

What one cannot see from the outside of the building is Garry Tracey's passion.

Today, amidst the numerous customers' vehicles in for brake repairs, tune-ups, oil changes or countless other forms of regular maintenance or repairs that the team of three GT technicians perform on a daily basis, if one looks deeper, one is apt to find a little more.

Garry Tracey is a hotrodder.

Today, one bay in the shop houses Garry's 1950 bullet-nosed Studebaker. Its original driveline long gone, the Studebaker is in the process getting 8.1 litre GM engine along with an updated automatic transmission and differential. Before that there was a 1954 ford rat rod. Prior to that there were, not one, but two, 1939 Plymouths (one with 454 cubic-inch Chevrolet power plant and one with a hemi conversion). A 1925 Dodge Brother's tow truck and a more modern PT Cruiser (also now housing a hemi engine) are also recent creations from the Cardinal shop.

"I started in Spencerville in 1966. I worked at Connell's BP," Tracey replies when asked how long he has been twisting wrenches for a living. "Fifty-four years I've been doing this."

Always a fan of fast cars, it wasn't until about 20 years ago he started experimenting with building his own hot rods.

"I hadn't done hot rods before that," he says. "I had cars that went fast...but not really hot rods. I just wanted something different; I like to be a little bit different than everybody else," he concludes with a hearty laugh.

His initial foray into building rods was spurred by some work he was having done at a fellow mechanic's shop.

"Gary Spero (SS Performance) was putting a front (steering) clip from a Mustang II in the front end of a (v8) Cavalier for me. I went up on weekends and such to get it moving along a little bit...and that was when I said; hell, I can do this."

In the ensuing two decades, Tracey has created about a dozen custom vehicles. For Garry, the challenge of building the cars often outweighs the thrill of owning and driving them.

"I like building it," he explains, before the laughter returns. "With the exception of my old tow truck, I get a riot out of driving that thing."

In the true spirit of the hobby, Garry finds that motivation often comes not from the resulting performance of the finished product, but more so in the challenge of stretching the limits of what is mechanically possible.

"When people tell me I can't do it," he states when asked what drives him. "Like, you can't put a hemi into a PT Cruiser. Oh, you can't? I think it would be neat. So that was like six months later (that he completed the hemi conversion). I brought it in in the fall and I made the car show at Rideau Carlton in the spring with it. So from November till May, in my spare time, we put the hemi in the PT Cruiser."

It is the same passion for doing the unexpected that has made GT Automotive a household name within the restoration and performance community, both near and far. Working on vintage vehicles and muscle cars presently accounts for about 30 percent of the shop's business.

"There are always old-car guys here. We do exhaust from Cornwall, Brockville, Gananoque, Nepean...we used to (before COVID) do stuff from Ogdensburg and over in the states. We have kind of gotten to be known for custom exhaust. They call me from all over the place. I don't' advertise for it. They just call me and say...my buddy told me this is the place you got to go to get exhaust."

All roads, it seems, can lead to GT Automotive. Sometimes even places past where the road ends.

"I worked on a 55 Ford Victoria for a guy in Australia," he explains. "Joe Shield had hooked me up with this guy. Joe is a Ford guy. You cut him and he bleeds blue. Joe called up and said I have a guy in Australia. He bought a Crown Victoria here...he wants me to go over it, make sure it is road worthy. He is going to fly in, pick it up and drive to California, load it on a ship and take it home. I've been all over it...it needs this, this and this. He's going to call you tomorrow. So I did that (the needed repair). He is in Australia, and I'm fixing his car. He called me from Australia with a credit card number. Joe picked up the car and the guy drove it to California and put it on a ship."

And where exactly is the end of the road?

Working hand-in-hand with his grandson Michael (who has also been bitten with the hot rod bug) and his wife Annette (who runs the office and tolerates them both), Garry Tracey figures there is plenty of gas left in the tank.