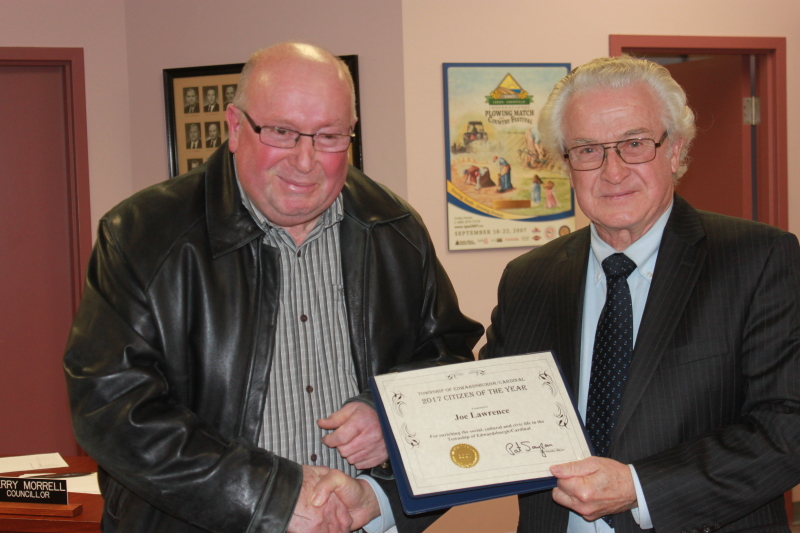 SPENCERVILLE - It would have taken a much larger room to hold them all, but a decent crowd of Joe Lawrence's friends and family filled Council Chambers on Monday night to see the long-time Spencerville native accept the 2017 Citizen of the Year award. For those in attendance, the award, handed out annually by Edwardsburgh-Cardinal Township, could not have been presented to a more worthy candidate.

John Hunter, who nominated Lawrence for the award, described Joe as 'more than just a great volunteer' as he outlined Lawrence's tendency to go above and beyond with a helping hand with old friends and strangers alike.

"Joe is this township's historian," Hunter said as he outlined the winner's great passion for both his community and it's history.

Mayor Pat Sayeau praised Lawrence's work with the Spencerville Fair. He particularly pointed out Joe's ongoing efforts with the 'Barn of Learning'.

"Every year, he somehow manages to include something new and keep the Barn of Learning fresh, " Sayeau stated. " It was a real pleasure to announce that Joe Lawrence had been selected as Citizen of the Year for 2017".

Lawrence, in expected fashion, had little to say in accepting the award, preferring to take the time to individually to speak one-on-one with the guests in attendance...all of whom he made sure were included in the "family" photo to follow.